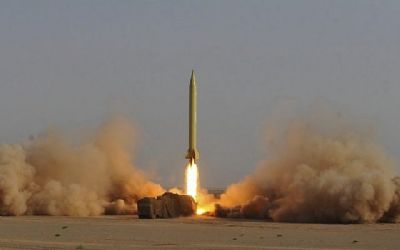 In a letter to the Security Council, Danon said a variant of the Shahab-3 medium-range missile was tested on January 2 in the region of Chabahar in southeast Iran. Three days later, he said, the country's military launched a variant of the Scud missile from a firing range 110 kilometers northeast of the city of Kerman...

Iran has conducted dozens of missile tests in recent years in violation of Security Council Resolution 2231, which affirmed the 2015 nuclear deal and called on Iran to refrain from developing missiles capable of carrying nuclear weapons. Iran has maintained that it never intended to develop nuclear weapons and therefore its missile development doesn't violate the agreement. Diplomats have said the language in the resolution is nonbinding and therefore can't be enforced with punitive measures.

Danon charged that the alleged tests were part of a series of 'Iranian breaches of this resolution this year, including the missiles it fired from Syria into Israel and the armed UAV it launched from Syria into Israeli airspace.'..."
Date
May 24, 2018
Title
Israel accuses Iran of testing 2 missiles this year, violating UNSC resolution, The Times of Israel
Author(s)
Michael Bachner
Original Source
https://www.timesofisrael.com/israel-accuses-iran-of-testing-2-missiles-this-year-violating-unsc-resolution/
Attachment
Click here to view this article in MS Word/PDF format