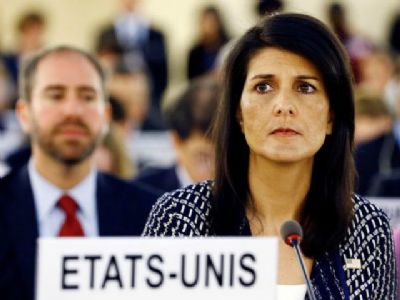 U.S. Ambassador to the U.N. Nikki Haley (File photo)
Today, the UN Human Rights Council adopted five resolutions condemning Israel. At the same time, the Council adopted only one resolution each against North Korea, Iran, and Syria. Every March, the Council sets aside only two sessions to debate human rights violations and abuses in all countries and another entire session just to debate a single country, Israel.

'When the Human Rights Council treats Israel worse than North Korea, Iran, and Syria, it is the Council itself that is foolish and unworthy of its name. It is time for the countries who know better to demand changes. Many countries agree that the Council's agenda is grossly biased against Israel, but too few are willing to fight it. When that happens, as it did today, the Council fails to fulfill its duty to uphold human rights around the world. The United States continues to evaluate our membership in the Human Rights Council. Our patience is not unlimited. Today's actions make clear that the organization lacks the credibility needed to be a true advocate for human rights,' said Ambassador Haley."
Date
March 23, 2018
Title
Press Release: Ambassador Haley on Continued Anti-Israel Bias at the United Nations Human Rights Council, U.S. Mission to the U.N.
Original Source
https://usun.state.gov/remarks/8347
Attachment
Click here to view this article in MS Word/PDF format