Nikki Haley tells United Nations: You're not the boss of U.S. 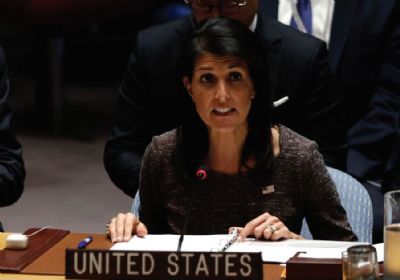 U.S. Ambassador to the U.N. Nikki Haley (File photo)
"Ambassador Nikki Haley blasted the United Nations Wednesday in a defiant speech to the 193-member General Assembly before it adopted a resolution calling for an end to the U.S. economic embargo on Cuba.

'Let's be honest about what we really see going on here,' Haley said. 'This assembly does not have the power to end the U.S. embargo. It is based in U.S. law, which only the United States Congress can change.'...

'Each year, this Assembly's time is wasted considering this resolution,' Haley told the assembly. 'And the United States is subjected to all manner of ridiculous claims â anything to deflect attention from the regime that is actually responsible for the suffering of the Cuban people.'..."
Date
November 1, 2017
Title
Nikki Haley tells United Nations: You’re not the boss of U.S., News & Observer
Author(s)
Franco OrdoÃ±ez
Original Source
http://www.newsobserver.com/news/nation-world/article182180821.html#storylink=cpy
Attachment
Click here to view this article in MS Word/PDF format