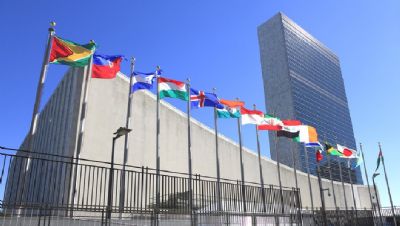 UN Headquarters
"Enemies of Israel have swapped terrorism for political warfare in a bid to destroy the Jewish State â and it is all taking place at the United Nations, Alex Ryvchin, editor of 'The Anti-Israel Agenda: Inside the Political War on the Jewish State,' told Newsmax TV on Monday.

'The United Nations is very much ground zero of the new internationalized war on the Jewish state,' Ryvchin told Newsmax's J.D. Hayworth. '. . . They tried to destroy the state from within through terrorism. And when that failed, they opened a new frontier, which is this political war.

'The U.N. played such a key role in the creation of Israel through passing the resolution in 1947 calling for the creation of two states, a Jewish state and an Arab state living side by side in peace. But in recent years it has become probably the chief purveyor of propaganda, of slurs, of the efforts to isolate and cripple the state.'..."
Date
July 31, 2017
Title
Israel’s Biggest Threat: Political Warfare at the United Nations, Newsmax
Author(s)
Bill Hoffmann
Original Source
http://www.newsmax.com/Newsmax-Tv/united-nations-political-warfare-Jewish-State/2017/07/31/id/804888/
Attachment
Click here to view this article in MS Word/PDF format