Whipped for drinking alcohol and executed for stealing: The horrific moment three men are shot dead in front of a mob by ISIS barbarians in Libya 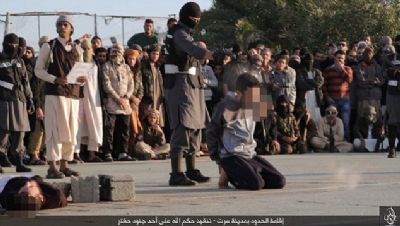 ISIS executing three men
ISIS militants in the Libyan town of Sirte have executed at least three men and whipped another for drinking alcohol, according to a 'photo report', published by the terror group.

Published on an anonymous content sharing website, it shows the deaths of three men and the whipping of four others.

In one photo a man in a grey t-shirt, his face blurred, is led to his death - the caption says he was executed for the sin of 'banditry'.

According to the 'report', the other men were executed for converting from Islam, for cursing god and for belonging to a militia loyal to Khalifa Haftar, the UN-backed government general deeply hostile to Islamist forces - both the self-appointed government in Tripoli and ISIS.

The post is entitled 'Implementing punishment in the city of Sirte' and links to ISIS-related hashtags in Arabic.

In the seven photos that follow, each is captioned with the sin the men are accused of committing and their punishment.

A crowd of masked men stand to watch as the punishments are carried out - a mixture of executions and whipping.

One photo shows a group of four of the accused on their knees in front of a crowd of masked men, as their 'sentence' is read out - the caption declares flogging is the punishment for drinking wine.

ISIS reportedly has 3,000 fighters in Sirte and has imposed the strict rules familiar with residents in their defacto capital in Raqqa, Syria.

Beheadings and crucifixions plague the town, which has been deserted by citizens by the thousands.

It comes as analysts warn that the terror-group is rallying more and more groups under their banner, despite losing ground in its strongholds of Iraq and Syria.

'From the start, Islamic State has vowed to take its fight globally, but until recently it has been focused on managing its caliphate in Iraq and Syria,' said Michael Kugelman, of the Woodrow Wilson Center in Washington.

With the Iraqi army re-taking some of the territory the group had taken, IS 'has re-dedicated attention to focusing on a more global approach', he said.

'The big question, after the Jakarta attacks and all of these attacks around the world in recent months that have been claimed by ISIS is - are these militants only inspired by ISIS or have they been directly managed by ISIS?' he said, using another name for the group.

Kugelman believes that IS is for now content to take credit for the attacks, using the 'brand recognition' of its name that has spread across the world, partly through social media, without necessarily dedicating resources or manpower to these groups.

'What you have here are disillusioned, alienated militants, who have been fighting with a different organisation, who are interested in identifying themselves with a more dynamic cause. And they see ISIS as a very dynamic cause - they are in the media all the time and commit spectacularly brutal attacks.'