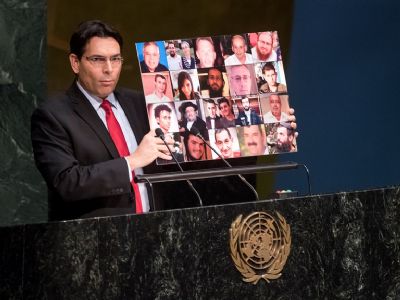 Israeli Ambassador Danny Danon at UN General Assembly plenary, November 23, 2015 (UN Photo/Cia Pak)
Forty years ago, Israel's Ambassador, Chaim Herzog, stood here at this very podium, and stood up for truth and for high principle at the lowest point in the history of the United Nations.

He courageously denounced the shameful attempt to define the national aspirations of the Jewish people for a home as a form of racism, the very evil that Jews in countries around the world have suffered from for centuries.

As I stand here before you today, that infamous decision has been repealed, but an endless number of biased and backward measures have taken its place.

Over the years, this assembly has passed countless one-sided resolutions blaming Israel for any and all problems confronting the Palestinians.

It is unfortunate that the seventieth session has joined the pitiful UN tradition of passing more than twenty empty anti-Israel resolutions, which deepen the conflict, distance us from real dialogue, and diminish the prospects of peace.

We do not need these resolutions, because we already had the resolution we needed.

Before all the endless documents and declarations, this assembly adopted a resolution to partition the British Mandate into a Jewish state, and an Arab state.

We accepted, and established a state for the sake of self-determination, the Arabs rejected it and launched a war.

Despite all the years of distortion and disinformation, there is one simple truth about the root cause of the conflict that remains clear and unimpeachable.

If the Arab states and the Arabs of mandatory Palestine had accepted the existence, the very existence, of a Jewish state, Israelis and Palestinians would have been spared decades of needless conflict, of unnecessary pain and suffering, and of the devastating loss of life on both sides.

But instead of saying yes to living side by side with Israel in peace, the Palestinians said no â No to peace, and no to the existence of a Jewish state. The echoes of that 'no' continue to this very day.

The resolutions before this Assembly deliberately ignore the root cause of the conflict- the unwillingness of the Palestinians â even today, even now â to accept a Jewish state in any part of the land between the Jordan River and the Mediterranean Sea...

If the Palestinian leaders are concerned for the protection of their own people, why do they encourage and incite them to terror and violence?

Looking for answers to any of these questions in the resolutions being discussed here today is harder than finding a needle in a haystack.

Instead, it is business as usual at the UN âhollow decisions and empty gestures.

Let no one be fooled. No amount of biased resolutions and empty symbols will bring the change that the people of the region so desperately need.

You can raise a Palestinian flag here in the UN, but as long as the Palestinians fail to raise a generation committed to peace and reconciliation, there will be no end to violence.

As long as those in this chamber do not demand that Palestinian leaders make the difficult decisions needed for peace, no rhetoric will improve the lives of the Palestinian people.

Since September, Israelis have experienced a wave of terror.

Innocent Israeli men, women, and children have been brutally stabbed in the streets, and intentionally run over at bus stops day in and day out â all for the crime of being Jews living in Israel...

This is a shameful day for the UN.

Instead of issuing a clear and categorical statement denouncing all acts of terror, this institution has granted legitimacy to Palestinian terror.

The heinous murder of a twenty innocent Israelis, just because they are Israelis, is no different than the cruel massacre of innocents in France.

If the UN wants to play a constructive role, it must get a grip on reality, and hold the Palestinians accountable.

Demand that the Palestinians leaders cease their incitement to violence.

And make it clear that peace will only come once the Palestinians accept that Israel is the home of the Jewish people.

This assembly may have repealed the disgraceful resolution that equates Zionism with racism.

However, forty years later, many in this institution still display hatred and hostility toward Israel.

The credibility of this institution depends on its integrity, and its impartiality.

The bashing of Israel here at the UN undermines the very values and ideals this institution was intended to uphold..."
Date
November 23, 2015
Title
Statement by Israeli Ambassador Danny Danon on the “Question of Palestine and Situation of the Middle East”, UN General Assembly
Original Source
http://statements.unmeetings.org/media2/7655460/israel.pdf
Attachment
Click here to view this document in MS Word/PDF format