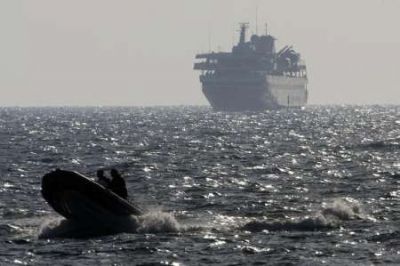 A speed boat escorts Turkish ship Mavi Marmara near the southern port of Ashdod on May 31, 2010 (Menahem Kahana/AFP)
"The office of International Criminal Court Prosecutor Fatou Bensouda, has appealed to the ICC appeals chamber regarding last week's decision requesting her to reconsider her earlier decision not to investigate Israel for allegations of war crimes committed during the 2010 Mavi Marmara flotilla incident.

Bensouda appealed the decision, which was passed by the court 2-1, which harshly criticized Bensouda for closing the file which saw 10 Turkish activists die on the flotilla that aimed to break the Israeli blockade on Gaza boarded by Israeli commandos.

The ICC told Bensouda that she should have taken the possibility into consideration that those killed by the IDF in the boarding, lost their lives in a 'deliberate plan or policy to attack, kill or injure civilians.' As well, the ICC added in their ruling that that she made 'material errors in her determination of the gravity' of the case.

In her appeal, Bensouda said that the decision of the court failed to take in consideration 'the unique context of violent resistance aboard the Mavi Marmara.'

'If new, reliable, facts or information become available, the Prosecution may reconsider her decision,' the appeal continued on to say...