Voting results on Draft U.N. General Assembly Resolution, "The right of the Palestinian people to self-determination," Adopted by Third Committee (163 in favor, 5 against, 10 abstentions) Development 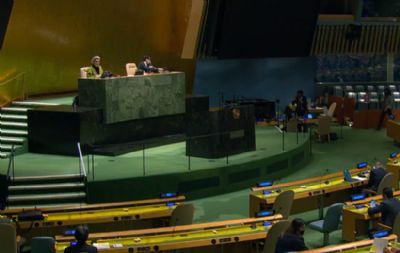 "Israel's ambassador to the United Nations on Thursday praised the world body for overwhelmingly approving an Israeli-sponsored resolution to support entrepreneurship but criticized Arab countries who voted against it, including the United Arab Emirates and Bahrain.

Opponents included the UAE and Bahrain. Egypt and Jordan, the other two Arab states that have full diplomatic relations with Israel, also voted against the resolution.

'Unfortunately, there are some in this body, who despite recognizing the value of innovation, decided to vote against it,' Erdan said. 'Their 'no' vote was driven not by reason or logic, but by anti-Semitism and intolerance. These member states should be ashamed. Instead of advancing a more sustainable future, they cling to racism and bigotry. We should all feel outraged.'
..."