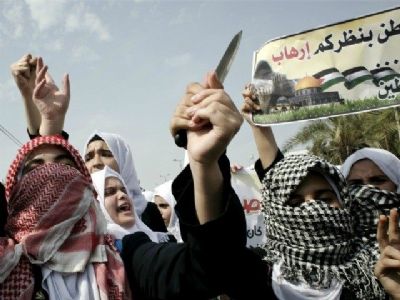 A bill sponsored by Senator Ted Cruz to hold Palestinians accountable for their support of terror and violation of their international obligations was referred to the Senate's Subcommittee on Middle East and North Africa on May 18, 2017. The bill was introduced in the Senate, and an identical bill was introduced into the House of Representatives by Congresswoman Ileana Ros-Lehtinen, on May 4, 2017. The bill calls for the Washington D.C. offices of the Palestinian Liberation Organization (PLO) to be shut and for sanctions to be imposed upon Palestinian leadership because of the Palestinians' support for terror, joining of international institutions, and initiating proceedings against Israel at the International Criminal Court.

"SEC. 3. Sense of Congress.
It is the sense of Congress that-
(1) the Palestine Liberation Organization (PLO) has failed to live up to its commitment to a bilateral peace process with Israel, renounce violence, accept Israel's right to exist, and honor previous diplomatic agreements made by the Palestinians, and continues to circumvent a negotiated settlement with Israel by seeking unilateral statehood at the United Nations and from other countries, actively endorsing terror, and supporting boycotts, divestments, and sanctions (BDS) against Israel;
(2) the Palestinian initiation of an International Criminal Court preliminary examination, investigation, or active support for such an investigation, that subjects Israeli nationals to an investigation for alleged crimes against Palestinians, is part of a deliberate effort to engage in diplomatic, legal warfare against Israel and would violate the Palestinians' commitment to not change the status of the West Bank and Gaza Strip;
(3) the only path towards solving the conflict is through direct negotiations between Israel and the Palestinians;
(4) the Palestinians should not turn to outside parties, including international organizations, to impose or otherwise influence a solution;
(5) it is in the national security interests of the United States to close down the PLO office in Washington, DC; and
(6) the executive branch should avail itself of the range of sanctions as allowed under the authority to impose sanctions under section 604 of the Middle East Peace Commitments Act of 2002 (subtitle A of title VI of Public Law 107â228) in order to hold the Palestinian leadership accountable."
Date
May 4, 2017
Title
S. 1060 PLO Accountability Act of 2017, U.S. Senate
Original Source
https://www.cruz.senate.gov/files/documents/Bills/20170504_PLO%20Accountability%20Act.pdf
Attachment
Click here to view this document in MS Word/PDF format
Note
Editor's Note: To track progress of bill click here