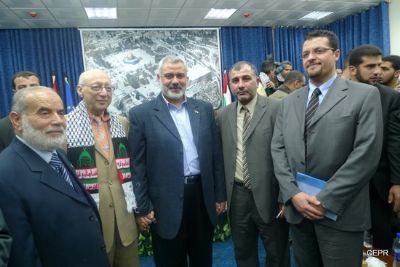 The New York State Bar Association is currently applying to become an officially accredited UN NGO, but its application was deferred on January 22, 2014 after Cuba questioned "information on Cuba on its website."

Another NGO seeking UN accreditation at this session is the Palestinian Return Center, documented as one of the central institutions through which Hamas operates in the United Kingdom. In 2012 the Center co-organized a UN "Human Rights" Council side-event in Geneva where its representative said

Various publications of the Palestinian Return Center were also distributed during this UN Geneva event, including a handout entitled "Apartheid against Palestinians," which analogized Israelis to Nazis: "The Israeli regime is based on... race and religious supremacy... Modern nation states formed through these corrosive ideals scarred the 20th century, including in Germany and the South African apartheid regime."

At the NGO Committee meeting on January 22, 2014 the Palestine Return Center was asked by the Israeli member of the UN NGO Committee "whether it respected Israel's territorial integrity." The question attempted to determine whether the NGO satisfied the number one requirement for accreditation, namely, respect for and adherence to the UN Charter. The Center representative replied: "it was not the Center's place or right to recognize or not recognize Israel." That would be the UN member state of Israel. Obviously, this response and this NGO's previous activities should disqualify it from membership. Equally obvious, despite the fact that its application was deferred for the moment, is that sooner or later it will be accredited.
Date
January 22, 2014
Title
Committee on Non-Governmental Organizations recommends 76 organizations for special consultative status with the Economic and Social Council; defers action on the status of 21 (Press Release), ECOSOC/6590, NGO/782
Original Source
http://www.un.org/News/Press/docs//2014/ecosoc6590.doc.htm
Attachment
Click here to view this document in MS Word/PDF format