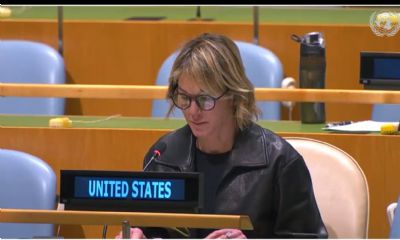 Far too often the membership of this vital body abandons principle for expediency and integrity for the presumed benefits of consensus. We convince ourselves that accommodation of all viewpoints, including those that run counter to the values outlined in the UN Charter, will eventually yield long-term progress.

Today this body is poised to adopt a budget that reflects such an accommodation that extends a shameful legacy of hate, anti-Semitism, and anti-Israel bias. The United States rejects this effort and called for this vote to make clear that we stand by our principles, stand up for what is right, and never accept consensus for consensus' sake.

As a firm believer in the United Nations, the United States is, and has always been, the largest and most reliable partner of the United Nations. That includes providing 25 percent of all peacekeeping expenditures, and more than $9 billion a year in support of humanitarian operations. That commitment will not change as a result of my vote. The U.S. is determined to properly implement the budget, ensuring efficiency, cost effectiveness and more rationalization.

I just know that we all can do better. Members of this body have ascribed to its founding principles, and too many â far too many â actively undermine those principles in this hall and across the UN system. Human rights abusers are rewarded with protection in the General Assembly and seats on the Human Rights Council.

Authoritarian regimes enjoy a cozy embrace and the sort of back-slapping hypocrisy that should sicken us all.

We need a UN that fulfills its founding purpose of marinating peace and security, the promotion of global cooperation, and the advancement of human rights. Just as the United States played a pivotal role in establishing the UN 75 years ago, its charter and Declaration of Human Rights, we will work hand in hand to put human dignity and decency at the center of our action. This flawed budget makes it glaringly obvious that membership of this institution has ceased to require a moral center, and the United States will not let this pass without registering this uncomfortable truth.

I am reminded of a quote from legendary human rights proponent and Holocaust survivor Congressman Tom Lantos, who was a member of the U.S. delegation to the original Durban conference, and remarked that it '...provided the world with a glimpse into the 'abyss' of international hate, discrimination, and indeed, racism.'

Twenty years on, there remains nothing about the Durban Declaration to celebrate or to endorse. It is poisoned by anti-Semitism and anti-Israel bias. It encourages restrictions on the freedom of expression. It exists to divide and discriminate and runs contrary to the laudable goal of combating racism and racial discrimination.

The United States has consistently registered its firm objections to the Declaration over the years, including calling for a similar vote on the budget in 2007. I shouldn't have to point out the irony here. While this body is eagerly endorsing two decades of dishonesty and division, the Trump administration is bringing nations together and bridging age-old divides between people through the Abraham Accords.

Having just recently returned from Israel, I can attest that the Abraham Accords offer a real path toward reversing the tide of conflict and misunderstanding. In this instance, as in others, the world is moving forward while the UN is stuck in the past.

The Trump Administration could not be clearer on this matter. The Islamic Republic of Iran is an enemy of peace and security, not only in the world but to its own citizens and will employ the UN's inaction to extend its violent influence, fuel additional discord, and inflict even more terror on vulnerable communities across the region. Decisions taken in this budget, by this body, have real-world consequences.

As I stated in September when the Trump administration announced the restoration of sanctions on Iran, the U.S. doesn't need a cheering section to validate its moral compass. We don't find comfort based on the number of nations voting with us, particularly when the majority have found themselves in an uncomfortable position of underwriting terrorism, chaos, and conflict. We refuse to be members of that club.

I would also like to note that in spite of very serious flaws, there are some important accomplishments within this budget, in particular funding for investigative mechanisms in Syria and Myanmar. The tens of millions of people suffering human rights abuses in these countries and elsewhere deserve our attention, support, and assistance. I have met with Syrian refugees, displaced Venezuelans, displaced South Sudanese, and Rohingya who have fled their homes. I understand the human toll of today's conflict and crisis, and the UN must focus its attention on these urgent needs.

Finally, let me underscore that today's vote is indeed to reinforce the U.S. commitment to a United Nations that functions effectively and in line with its founding principles. Anyone that would suggest otherwise is comfortable with a status quo that undermines the very purpose of this institution.

This should not be considered criticism of our Secretary-General. He has proven to be a good steward of our taxpayer dollars, especially in unprecedented times such as these. The American people would expect nothing less of me.

I have high esteem for the work and reform agenda and we are going to continue working hand in hand with the Secretary-General towards achieving these goals.