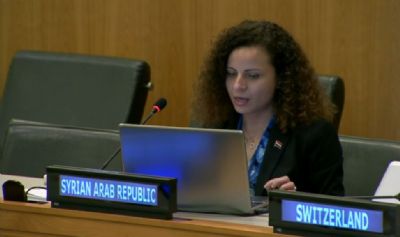 A representative of Syria during the meeting on October 23, 2017
Islamic countries at the UN spent an afternoon accusing Israel of "grave violations" and "racist policies" over Israel's use of its own natural resources. The accusations were made on October 23, 2017 during an annual debate in the UN General Assembly's Second Committee â composed of all 193 UN Member States â on the topic of "Permanent sovereignty of the Palestinian people in the Occupied Palestinian Territory, including East Jerusalem, and of the Arab population in the occupied Syrian Golan over their natural resources".

The debate immediately followed the presentation of a report by ESCWA (the UN Economic and Social Commission for Western Asia) Executive Secretary Mohamed Ali Alhakim â whose predecessor infamously accused Israel of "apartheid". The report delivered by Alhakim is entitled "Economic and social repercussions of the Israeli occupation on the living conditions of the Palestinian people..."

Numerous Islamic states accused Israel of violating the rights of Arabs inside Israel, notwithstanding the deplorable living conditions and widespread discrimination in nearby countries such as Syria and Iran. Nearly hysterical accusations were made of Israel, such as it being "ruthless," of "lopsided treachery," "crimes against humanity," "pillaging," and "abominable policies." Deaf to the irony, many countries alleged the Arabs of the Golan Heights, which Syria claims as its territory, were suffering by not being under the control of the Syrian regime.

In their words: The Israeli representative responded by pointing out the absurdity of the discussion and the accusations of oppressive regimes like Syria.

"[I]t is surreal to hear, year after year, allegations of human rights violations by Israel from some of the world's most infamous human rights abusers... The Syrian delegate's cynical attack on my country today are just another desperate attempt to divert attention from the crimes that they commit against their own people on a daily basis. The population on the Golan are well and alive. This is something which we unfortunately cannot say about hundreds of thousands of Syrian citizens killed in Syria during the last year.
...
To the Syrian distinguished representative, I would ask, perhaps you would inform the committee how dropping barrel bombs on schools, markets and hospitals are compatible with development."
Date
October 23, 2017
Title
UN meeting slams Israel for using natural resources to build while its neighbors use them to destroy
Original Source
http://webtv.un.org/search/second-committee-21st-meeting-general-assembly-72nd-session/5617834505001/?term=Second%20Committee