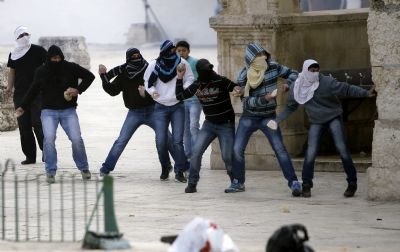 Palestinians rioting against security measures on the Temple Mount
In a briefing to the Security Council, UN Assistant Secretary-General for Political Affairs Miroslav Jenča equated the vicious murder of three Jews in their home during a Sabbath dinner with the deaths of Palestinians rioting against security measures at the Temple Mount. In his August 22, 2017 statement, Mr. Jenča raised concerns about Israeli security forces defending themselves during clashes with Palestinian rioters, but expressed no concern about Palestinian incitement to violence or about Palestinian funds being used to support terrorists and their families.

"Following the deadly 14 July attack in which two policemen were killed by three assailants in the Old City, three Israelis were stabbed to death in a terror attack, and six Palestinians were killed during primarily peaceful protests, two as a result of live ammunition, which raises concerns about the use of force by Israeli security forces."
Date
August 22, 2017
Title
UN Equates Stabbing a Jewish Family to Death with Defending Against Palestinian Riots, UN Web TV
Original Source
http://webtv.un.org/watch/miroslav-jenča-assistant-secretary-general-for-political-affairs-on-the-situation-in-the-middle-east-security-council-8028th-meeting/5548056094001/