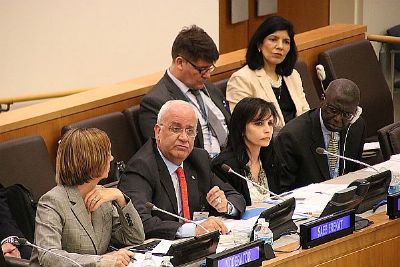 Panelists at a session of the "U.N. Forum to Mark Fifty Years of Occupation" on June 29, 2017, including the Secretary-General of the Palestine Liberation Organization Saeb Erekat
Participants in an Israel-bashing U.N.-sponsored forum, held in New York on June 29-30, 2017, used the globally webcast opportunity to make numerous calls to boycott, divest, and sanction (BDS) the Jewish state. BDS seeks to accomplish through economic warfare what Arab armies and terrorists have failed to accomplish after seven decades.

The calls were made at the U.N. "Forum to Mark Fifty Years of Occupation," organized by the U.N.'s Committee on the Exercise of the Inalienable Rights of the Palestinian People, a body created in 1975 to implement the infamous General Assembly resolution declaring Zionism to be a form of racism. The Forum saw numerous instances of antisemitism and calls for violence, and comparisons of Israel to ISIS.

Among the BDS calls:

Jody Williams, U.N. invited keynote speaker
"No state likes to be a pariah; look at South Africa. Now we're told that the BDS movement won't work, won't do anything. Well, it helped in South Africa."

Mustafa Barghouti, U.N. invited panelist, Member of the PLO Central Council, the Palestinian Legislative Council, and General Secretary of Palestinian political party the Palestinian National Initiative
"The entry point is to change the balance of power, and that can be achieved, in my humble opinion, through five ways, or five pillars, the first of which is resistance...The second pillar is boycott, divestment, sanctions: BDS. The Israelis don't like it. It's their problem. They will fight against it. It's their problem. But it is the one of the most effective methods because it first of all allows Palestinians in the diaspora to participate in the Palestinian struggle..."

"Second, definitely put every effort you can in contribution to the strengthening of the Boycott Divestment Sanctions. BDS is the most powerful instrument, and it should be used, and it is effective, and that's why the Israeli government is so crazy and mad about it..."

"But to be frank with you, it has to be a complete boycott of Israel as a government..."

NGO: "Save Israel, Stop the Occupation Partnership"
"The second point I wanted to make is about BDS. So these past two days we have heard a lot about the occupation, about '67, and as Jessica [Nevo] mentioned, not much about '48. But on the other hand, when we speak about BDS, we never distinguish. The BDS is against Israel-all of Israel. Right? So I want to make a comment on that. I think that although boycotting Israel, Israel is in charge of the settlements and all these policies."

Saeb Erekat, U.N.-invited speaker, Secretary-General of the Palestine Liberation Organization
"They have five artificial lakes for crocodiles because some Europeans like to buy the crocodile shoes and bags, vineyards, turkey for their thanksgiving. That is a shameful chapter in human relations and international law. Settlement products must be boycotted if we want to end the Israeli occupation."

Dalit Baum, U.N.-accredited (through Friends World Committee for Consultation) NGO: American Friends Service Committee
"What we have today with the Boycott, Divestment, Sanctions Movement is a new step. The idea is that instead of waiting for states to take action using, let's say, Resolution 2334, as we discussed before, we can try and influence politics from the grassroots up...And part of what we're trying to do through the complaints I'm involved in, usually labeled as boycott, divestment, sanctions, is to really track lines of accountability everywhere and try to make the price higher by creating a higher risk for any kind of continued support and normalization of the occupation."

David Wildman, U.N.-accredited NGO: United Methodist Church
"In 1982 and again in 1983 in the aftermath of Israel's invasion of Lebanon, the UN General Assembly here called for an international boycott of Israel. And it called for international sanctions to be imposed on the Israeli state. So that was the UN here calling for that 45 years ago, so I just want to say it's out there...So it makes sense that civil society, in the anti-apartheid movement and in relation to Palestine and Israel, have turned to boycott, divestment, and sanctions as nonviolent actions. And so I wanted to say that's a natural progression. We'd be-love to defer and give that right back to the member states as they join us in taking up Boycott, Divestment, and Sanctions. So we hope that."

Rebecca Vilkomerson, U.N. (CEIRPP) accredited NGO: Jewish Voice for Peace
"It's very important to be able to talk about full boycott because again, we're talking about-when we talked about the boycott of South Africa-people did not boycott the Bantustans. They boycotted the government of South Africa, which were allowing-which were imposing apartheid throughout the country...People can choose to boycott different kinds of things within that, but the framework is the same. You can't stop-you cannot stop the-the conditions on which the boycott movement is based, do not end on the settlements."

U.N. (CEIRPP) accredited NGO: Al-Awda
"I'm wondering whether the panelists and the member states would consider engaging in work ... by perhaps looking especially at settlers who were dual nationals and whether we can advocate for the other home country to engage in the criminalization or otherwise blacklisting, if you will, of settlers looking to either colonize or to engage in violence in Palestine?"

Noura Erakat, Assistant Professor, George Mason University
"The fact-finding mission to the Gaza Strip in 2009 was shelved and seems to be irrelevant. But within it are still recommendations that any state can pursue, including applying sanctions for arms to Israel. There is no reason not to apply those sanctions which have been recommended."
Date
June 30, 2017
Title
U.N. Hosts Forum Openly Advocating the Economic Devastation of the Jewish State
Original Source
http://webtv.un.org/meetings-events/watch/1st-meeting-un-forum-ending-the-occupation-the-path-to-independence-justice-and-peace-for-palestine/5487676788001