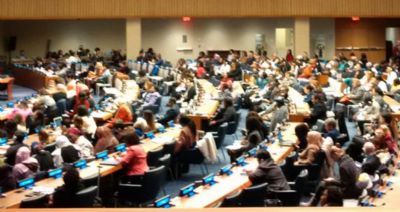 Excerpts from the document include:

"Expressing deep concern about the grave situation of Palestinian women in the Occupied Palestinian Territory, including East Jerusalem, resulting from the severe impact of the ongoing illegal Israeli occupation and all of its manifestations"

"Expressing grave concern about the increased difficulties being faced by Palestinian women and girls living under Israeli occupation, including as a result of the continuation of home demolitions, evictions of Palestinians, the revocation of residency rights, arbitrary detention and imprisonment, as well as high rates of poverty, unemployment, food insecurity, inadequate water supply and unsafe drinking water, shortage of electricity and fuel, incidents of domestic violence and declining health, education and living standards, including the rising incidence of trauma and the decline in their psychological well-being, particularly in the Gaza Strip, where a humanitarian disaster continues to severely affect the situation of women and girls"

"Deploring... the systematic violation of their human rights resulting from the severe impact of ongoing illegal Israeli practices..."

"Expressing grave concern about all acts of violence, intimidation and provocation by Israeli settlers against Palestinian civilians, including women and children... condemning acts of terror by several extremist Israeli settlers, and calling for accountability for the illegal actions perpetrated in this regard"

"Gravely concerned about tensions and violence... as a result of the excessive and indiscriminate use of force by Israeli occupying forces"