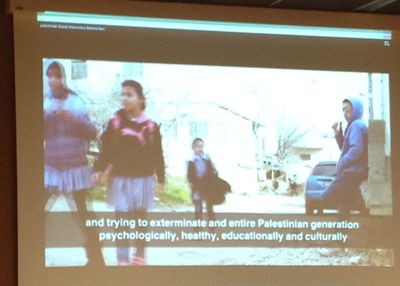 A clip from a movie shown at a UN Human Rights Council side session, which states: "... and trying to exterminate and [sic] entire Palestinian generation psychologically, healthy, educationally and culturally," March 22, 2016
On the sidelines of the UN Human Rights Council, so-called "human rights" organizations are accusing Israel of attempting to "exterminate" Palestinians.

These meetings are perceived as fora to influence diplomats and UN staff. As the UN booking form explains: "NGO parallel events are public meetings and may be attended by NGOs, Permanent Mission Representatives, UN Staff and other persons with access to Palais des Nations."

On March 21, the UN-accredited NGO "The Khiam Rehabilitation Center for Victims of Torture" held one of these "informal" meetings entitled "Children and Women in Israel Jails" and showed a movie accusing Israel of torturing and sexually abusing children and of attempting to exterminate Palestinians. Here are some of the allegations from the movie:

"Among those methods is torture by electricity and obliging them to take of [sic] their clothes... they provoke you trying to make certain movements which signifies sexual assaults... This is considered sexual violence against the child... The occupation authorities try to break their thorn. They cause them psychological diseases and don't try to handle them... trying to exterminate and [sic] entire Palestinian generation psychologically, healthy, educationally and culturally."

"Palestinian children, who suffer and endure tremendous types of torture committed by one of the worst occupying forces in the world that mankind has ever known... many Palestinian children endure torture, sexual abuse... Israel is an apartheid state, it is a belligerent occupier, and it practices colonialism... we want to bring these criminals to account for the crimes that they have committed, for the torture that they inflict... the torture of children and Palestinians held in Israeli prisons constitute crimes against humanity..."
Date
March 22, 2016
Title
Side Panel at Human Rights Council Session, “Children and Women in Israel Jails”, Unofficial transcript, Human Rights Voices