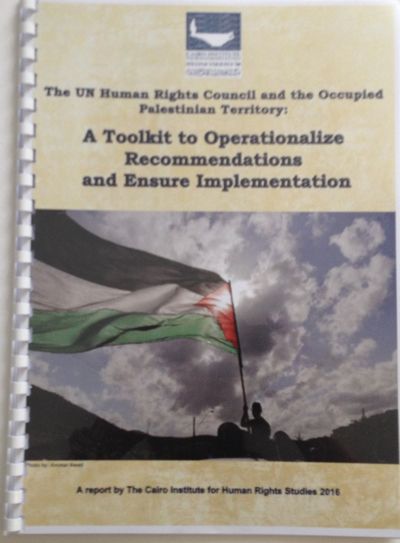 These meetings are perceived as fora to influence diplomats and UN staff. As the UN booking form explains: "NGO parallel events are public meetings and may be attended by NGOs, Permanent Mission Representatives, UN Staff and other persons with access to Palais des Nations."

On March 18, the UN-accredited NGO "The Cairo Institute for Human Rights Studies" held one of these "informal" meetings entitled "Human Rights in the State of Palestine," in which featured panelists discussed how they are planning to use lawfare against Israel.

An attendee at the panel asked the following:

"I would just like to request from the panelists if there was any consideration on the concept of lawfare as a mechanism in order to bring Israeli commanders and politicians to be held accountable for crimes that are committed against the Palestinians with impunity? That is my question, the reason being that an area of work that I'm involved in is lawfare, whereby we bring court applications utilizing the mechanisms of universal jurisdiction and the Rome Statute, whereby cases are brought before the South African prosecuting authorities and police in order to hold such commanders and politicians responsible. "

Here is the response of some of the featured panelists:

Mona Sabella, legal research and advocacy officer at the UN-accredited NGO called "AL-Haq": Al-Haq as well as other Palestinian human rights organizations are engaged currently with the International Criminal Court. Palestine ratified last year the ICC Rome Statute and we're following up very closely with the Office of the Prosecutor in The Hague on our submissions there."

Bob Jones, Campaigns and research officer at the UN-accredited NGO "Medical Aid for Palestinians": "As you mentioned, lawfare. So the importance of legal mechanisms in all of this work cannot be underestimated, alongside political solutions, obviously."

Yara Jalajel, legal researcher at the "Cairo Institute for Human Rights Studies": "And there's obviously of course all the legal work that can happen in different jurisdictions, whether it's the international jurisdiction mechanisms, ICC, or universal jurisdiction..."

The panel also featured a slew of outrageous accusations against Israeli forces defending themselves from Palestinian stabbing, shooting, and car ramming attacks. Here is just some of what the featured panelists alleged:

Mona Sabella: "Israeli state policies ... facilitate and encourage extrajudicial killings... stone throwing does not meet the threshold of posing an imminent threat to life, nor a threat of serious bodily injury. So accordingly, the use of-the large-scale use of deadly force to respond to stone throwing, it's disproportionate, it's unnecessary, and it amounts to an arbitrary deprivation of life."

Nuriya Oswald, program coordinator at the UN-accredited NGO "The Al Mezan Center for Human Rights": "Israeli forces are targeting these individuals with excessive and intentional force without justification. And we consider these cases to be deliberate fatal shootings of individuals, individuals who pose no imminent threat to life and they amount to an appalling pattern of apparent systematic unlawful killings... conditions in the Gaza Strip, which are grown by Israel, should not be taken as an opportunity to implement practices of abuse, practices which in many instances amount to cruel, inhuman and degrading treatment and amount to torture. "
Date
March 18, 2016
Title
Side Panel at Human Rights Council Session, “Human Rights in the State of Palestine”, Unofficial transcript, Human Rights Voices
Attachment
Click here to view this document in MS Word/PDF format