At UN "Human Rights" Council, Concern for Human Rights of Palestinian Terrorists - Not Their Victims 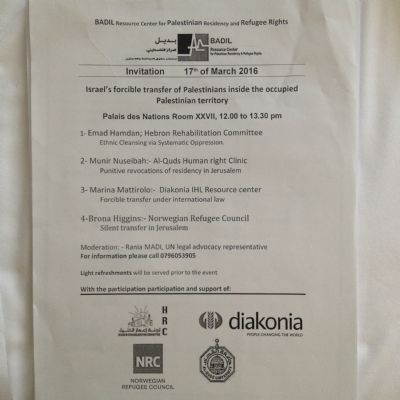 The program of the side event "The forcible transfer of Palestinians inside the occupied Palestinian territory," UN Human Rights Council, March 17, 2016
On the sidelines of the UN Human Rights Council, alleged "human rights" organizations voice support for terrorists, not their victims - when their victims are Israeli. These sessions are no accident. They are held on UN premises, and the UN advertises the events.

On March 17, the UN-accredited NGO The Badil Resource Center for Palestinian Rights held an informal meeting entitled "Israel's forcible transfer of Palestinians inside the occupied Palestinian territory", in which a featured speaker twisted the concept of human rights to support the rights of Palestinians terrorists rather than the Israeli they murdered. In the words of Munir Nuseibah from the Al-Quds Human Rights Clinic:

"So in 2015 we have had the case of four Palestinians,... and there's a criminal procedure against them with the accusation of throwing a stone at a vehicle, which allegedly resulted in death, a case of death of somebody dying out of this throwing stones. In the decision... the Minister of Interior mentioned that it was revoking the residencies of those individuals, because there was a blatant breach of allegiance to the state of Israel. So now Palestinians who threw stones at the vehicle, will lose their residency because of the blatant breach of allegiance. And this is what is scaring us as a human rights organization. And this is why we are here today to speak to you about it."
Date
March 17, 2016
Title
Side Panel at Human Rights Council Session, “Israel’s forcible transfer of Palestinians inside the occupied Palestinian territory”, Unofficial transcript, Human Rights Voices
Attachment
Click here to view this document in MS Word/PDF format