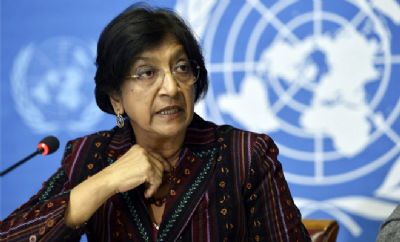 Even in death she refused to say the three boys had been kidnapped, or that they had been taken by Palestinian terrorists. In the words of her office, they "had gone missing."

After the perfunctory "condolences," she launched into demands that Israel exercise restraint and "prevent the situation of worsening." She analogized the death of the three boys to Palestinians killed as Israel strove to save lives - not to take them.

Here is her despicable moral relativism - modern antisemitism - that at the UN goes by the name of human rights.

"OHCHR called on all Israelis and Palestinians to exercise maximum restraint and to prevent the situation from worsening further. The previous night, a Palestinian teenager had been killed by Israeli forces in the north West Bank, bringing to seven the number of Palestinians killed in the West Bank, including three teenagers, since 12 June. OHCHR's condolences went to all of their families. Also, the previous night, at least six Palestinians had been injured by Israeli forces in the West Bank. OHCHR had also noted an increase in rocket fire from the Gaza Strip and air and sea strikes by Israeli forces in Gaza, additional movement restrictions and incidents of settler violence in the West Bank...OHCHR reiterated its call for strict adherence to international law by all relevant actors, to avoid further loss of life, injuries and negative impact on human rights. OHCHR urged all parties to refrain from punishing individuals for offences they had not personally committed or by imposing collective penalties."
Date
July 1, 2014
Title
Obscene response from UN rights commissioner Pillay to murder of 3 Israelis
Original Source
http://www.unog.ch/unog/website/news_media.nsf/(httpNewsByYear_en)/B8404AA8C54AC33DC1257D080049AF2F?OpenDocument
Attachment
Click here to view this document in MS Word/PDF format