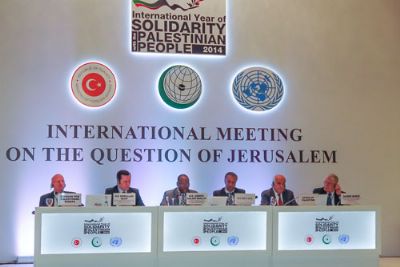 Day two of the "The UN International Meeting on the Question of Jerusalem" in Ankara, Turkey turned into an anti-Israel frenzy.

May 13, 2014 was the final day of a 2-day event organized by the UN "Committee on the Exercise of the Inalienable Rights of the Palestinian People." The meeting was in "observance of the international year of solidarity with the Palestinian people" whose primary purpose is the unmitigated demonization of the UN member state of Israel.

The discussion included the following:

Mohamed Barakeh, Member of the Knesset, Jerusalem, pointed to the creation of Israel as the real problem, claimed that the Israelis are conspiring to destroy Muslim and Christian holy sites and advocated violence. In his words: "May 1948 was the date of 'the disaster'. In commemoration of that date, there will be numerous demonstrations and political events , which will stress the effects of 'the disaster' which practically transformed all of the Palestinian peopled into "a state of deported people...There are terrorist cells, which are operating under the sponsorship of the Israeli authorities, small groups that were responsible for making the Muslims of Jerusalem pay the price. The Head of the Israeli Secret Services acknowledged that Israel could annihilate these terrorist groups, if the decision to do this is taken. These groups are working to destroy both Muslim and Christian Holy Sites. .. There has to be an initiative to give new impetus to popular resistance in Jerusalem."

Jad Isaac, Director-General, Applied Research Institute, Jerusalem, said that "As of 1967, Israel adopted a strategy of 'de-Palestinization', including by ... obliterating Palestinian cultural and historical names...Not only are they targeting the alive, they are also targeting the dead...Israel did not only extend the apartheid system to housing, but also to health and education ...We have to dispel the myths, which Israel has adopted as narrative."

Mahmoud Elkafif, Coordinator, Assistance to the Palestinian People Unit, United Nations Conference on Trade and Development (UNCTAD), declared that "Jerusalem is Palestinian." He presented an UNCTAD study released in 2013 which compares Israel to apartheid South Africa. The study says: "the existing physical fragmentation between different Palestinian 'bantustans' drawing on South African experience of economically dependent, self-governed 'homelands' existing within the orbit of the advanced metropolis."

Adnan Al-Husseini, "Minister of Jerusalem Affairs of the State of Palestine" also analogized Israel to apartheid South Africa "In order to face the magnitude of the abuse by Israel and to put a stop to the apartheid regime, similar to that which prevailed in apartheid South Africa, an appeal is made to universities to be vigilant about the Jewish version of Jerusalem and Palestine" and requested "that the United States cease and desist its support for Israel."

Mohammad Shtayyeh, President, Palestinian Economic Council for Research and Development, Senior Advisor to President Mahmoud Abbas on negotiations with Israel, accused Israel of pursuing "the judaization of the city."

Emrullah Isler, Deputy Prime Minister of Turkey made it clear that the problem was Israel's creation, not a 1967 "occupation." He praised the Palestinians for "continuing their fight against the historic injustice which began in 1948."

The take-away for the Palestinian contingent, was the benefits of so-called resistance - the opposite of peaceful coexistence. At the end of the meeting Riyad Mansour, Permanent Observer of the "State of Palestine" to the UN "thanked" everyone for "correctly conveying" the message about the "immense pain" of the Palestinian people and added: "The Palestinians were resisting as much as they could in every place, including Jerusalem. It was their duty and they would continue doing so. Their efforts would be intensified further..."
Date
May 16, 2014
Title
UN Year of Solidarity with Palestinian People Meeting Becomes Anti-Israel Free-for-All
Original Source
http://unispal.un.org/unispal.nsf/47d4e277b48d9d3685256ddc00612265/07931f3c59f014e685257cd7006f7e95?OpenDocument
Attachment
Click here to view this document in MS Word/PDF format