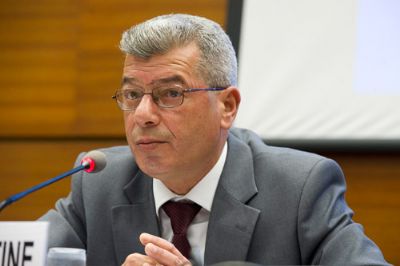 The Committee was created by the U.N. General Assembly back in 1975 to implement the infamous Zionism-is-racism resolution. The resolution was rescinded 16 years later but the Committee is still in place, and operating year-round with 49 U.N. states and observers as members.

The UN Press release claimed the meeting was supposed to "discuss the legal status of Palestinian political prisoners and detainees" and "to consider the issue of Palestine's admission to the United Nations as a non-Member Observer State."

The opening session of the roundtable held on April 24 offered an insight into the main objective of this gathering: unmitigated demonization of the UN member state of Israel.

UN staff was only to happy to oblige. Michael Moller, Acting Director-General of the United Nations Office at Geneva, said: "we are here today to build on numerous previous events" and he was "privileged to host again such gathering". Moller read the statement on behalf of UN Secretary General Ban ki-Moon who was "pleased to send greeting to all participants" and "thanked" the Committee for organizing the meeting. The Secretary-General was also "deeply troubled" by Israel's continued house construction. Anders Kompass, who was representing the Office of the Human Rights Commissioner for Human Rights, was "delighted" to be there and extended "thanks" to the Committee for organizing the meeting.

Abdou Salam Diallo, the Senegalese Chairman of the Committee, put the blame for the failure of the peace process entirely on Israel.

Issa Qaraqe, Palestinian Minister for Prisoners' Affairs represented the Palestinian Authority. His slanderous comments accused Israel of torturing and raping little children and subjecting Palestinian detainees to medical experiments. Violence, he declared, was the Palestinian right and intention. Here are some of his words (UN translator, original in Arabic):

"I convey the greetings of families and prisoners in Israeli prisons and camps.... Israeli authorities since 1967 have detained ...children, women, sick people, and disabled...UN resolutions have confirmed the right and legality of resistance of people ... and supported national liberation movements to liberate from foreign occupation and control... Israel committed ...war crimes and crimes against humanity against these prisoners... Israel ...is using cruel and barbaric methods of torture, including on children from the moment of detention. Detention is done under the pretext of the fight against terrorism... The youngest child was only 8 years old... Some of them are subjected to sexual assaults... Thousands of medical experiments are conducted by Israeli pharmaceuticals against Palestinian detainees... The Israeli court system is inherently unjust."

When he finished the Chairman of the UN Committee Diallo thanked him "for representing state of Palestine during this meeting."

Thereafter the UN closed the meeting to members of the public. The discussions of the roundtable, with the exception of the opening and closing sessions, are open only to members of the Committee and the UN staff which services their obscene activities.
Date
April 24, 2014
Title
Roundtable on Legal Aspects of the Question of Palestine Opens in Geneva (Press Release)
Original Source
http://www.unog.ch/unog/website/news_media.nsf/(httpNewsByYear_en)/2827396ADA9E7138C1257CC40034C4E7?OpenDocument
Attachment
Click here to view this document in MS Word/PDF format