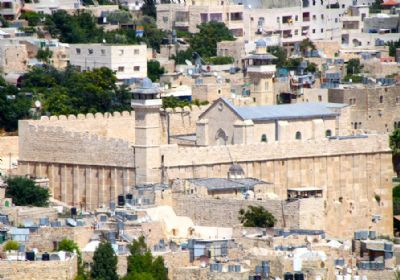 Cave of the Patriarchs
"Long before the United Nations or organizations such as UNESCO were ever conceived â indeed long before there were nation-states as we know them â the people known today as Jews lived in the Land of Israel, shared a common language and heritage and were united by a set of canonical texts that became the Hebrew Bible. They viewed Hebron as a holy city resonant with history and religious meaning.

No matter what was decided Friday by UNESCO, an organization regularly hijacked to advance the narrow interests of peoples purportedly suffering western dominance, there is no denying the Jews' ties to Hebron.

Those ties are deeper and arguably date back earlier than the Jews' ties to Jerusalem, another city deemed by UNESCO to be devoid of Jewish history....

The 1929 Palestinian pogroms orchestrated against the Jews of Hebron by the rabid Jew- hater and Nazism admirer, Mufti Haj Amin al-Husseini, left over 60 men, women and children dead and dozens more injured. In 1936, the British evacuated the remaining Jews ahead of a Palestinian uprising. Only after Israel's victory in the Six Day War could Jews return to Hebron to live.

All of this information and more is readily available.

Yet a UNESCO report disingenuously blames Israel for its own failure to recommend an alternative to the Palestinian proposal. Why? Have UNESCO officials not heard of the Bible, Google or Wikipedia? The vote by the UN's cultural organization to declare Hebron a Palestinian World Heritage site in danger had nothing to do with education, science or culture. It is, instead, a form of propaganda. Rewriting history hinders and further complicates efforts to address the very real problems now preventing a political solution to the Israeli-Palestinian conflict...

Admittedly, denying Jews' ties to the Temple Mount or to Hebron is a symptom of a deeper hatred, possibly based on envy. Muslims know that these sites and others would have no holiness for their faithful if they were not first and foremost places with deep spiritual, historical and religious resonance for Jews.

It is a shame that UNESCO became an accomplice to this diplomatic sabotage."
Date
July 9, 2017
Title
Hebron ties and lies, The Jerusalem Post
Original Source
http://www.jpost.com/Opinion/Hebron-ties-and-lies-499212
Attachment
Click here to view this article in MS Word/PDF format