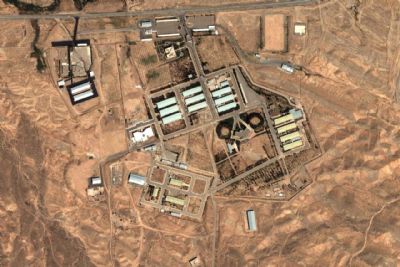 Satellite image of the Parchin military site in Iran (File photo)
"The Obama administration has concluded that uranium particles discovered last year at a secretive Iranian military base likely were tied to the country's past, covert nuclear weapons program, current and former officials said, a finding that contradicts Tehran's longstanding denials that it was pursuing a bomb.

Traces of man-made uranium were found at the Parchin facility, southeast of Tehran, by investigators from the International Atomic Energy Agency, the United Nations' nuclear watchdog, as part of an investigation tied to the landmark nuclear deal reached last July between Iran and global powers.

The Iranians have claimed that the site was used for developing and testing conventional weapons. The particles were the first physical evidence-on top of satellite imagery and documents from defectors-to support the charge that Iran had been pursuing a bomb there...

They and some U.S. allies, particularly Israel and Saudi Arabia, fear that Tehran could quickly resume nuclear weapons work when the deal expires, or do it covertly...

Critics of the nuclear deal have cited the presence of uranium at Parchin as evidence the Obama administration didn't go far enough in demanding Iran answer all questions concerning its past nuclear work before lifting international sanctions in January. They also argue that it is hard to develop a comprehensive monitoring regime without knowing everything Iran has done..."
Date
June 19, 2016
Title
Uranium Provides New Clue on Iran’s Past Nuclear Arms Work, The Wall Street Journal
Author(s)
Jay Solomon
Original Source
http://www.wsj.com/articles/uranium-provides-new-clue-on-irans-past-nuclear-arms-work-1466380760
Attachment
Click here to view this article in MS Word/PDF format