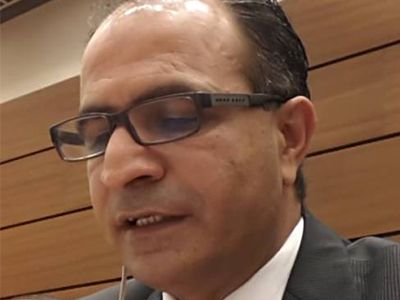 Adel Atieh, Counselor, Mission of Palestine to the UN
On September 19, 2014 a Palestinian diplomat, speaking at a side event during the current UN Human Rights Council session in Geneva, compared Israel's actions in Gaza to the bombing of Hiroshima. Permission for all such side events must be given by the UN secretariat, and the events are advertised by the UN.

Here are some of the comments made by Adel Atieh, representing the peace-seeking "state of Palestine:"

"The political context before this [Israeli] attack, aggression is really speaking about the kidnapping of 3 young Israelis which is bizarre because no Palestinian organization claimed responsibility in the killing of the Israelis...Israel used huge contingents of bombs on the Gaza strip. 20,000 tons of explosives. To give you an idea of this 20,000 tons on the Gaza strip...the Hiroshima bomb...need[ed] only 13,000...Israel is committing crimes against humanity."

The meeting was organized by the UN-accredited NGO "Maarij Foundation for Peace and Development" which in 2012 invited a representative of the terrorist organization, Hamas, Ismail al-Ashqar, to speak at the similar side event.
Date
September 19, 2014
Title
UN Human Rights Council side-event: “Human rights in Israel and the Occupied Palestinian Territory”, organized by Maarij Foundation for Peace and Development
Attachment
Click here to view this article in MS Word/PDF format