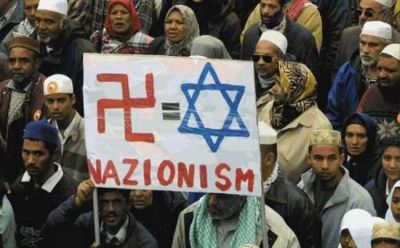 The streets of Durban, South Africa during the 2001 Durban I conference
"The Biden administration led over 150 other countries in a statement Friday that positively recalled the 2001 United Nations World Conference Against Racism - a meeting in Durban, South Africa, marred by antisemitism and radical anti-Israel rhetoric.

The Durban conference is widely remembered as one of the lowest points in the history of the United Nations, an event at which efforts to combat racism were hijacked by countries and activists hostile to Israel in an explicitly antisemitic way...

Activists once hoped the Durban conference would be an opportunity to celebrate South Africa's emergence from apartheid, and to address the worldwide legacy of black slavery.

But the conference - which included a prepatory gathering in Iran - was dominated by an anti-Israel agenda. In addition, radical activists disseminated antisemitic propaganda and even broke up a meeting that was to have discussed antisemitism as one of the forms of bigotry the NGO forum should address.

The declaration of the non-governmental organizations (NGOs) in Durban was so viciously anti-Israel - singling out Israel and comparing it to apartheid South Africa - that it was rejected outright by the UN High Commissioner on Human Rights.

However, the main declaration adopted by the Durban conference was also problematic. It singled out Israel for criticism and described the Palestinians under the heading 'victims of racism,' claiming falsely that they lived under 'foreign occupation.'

The Durban declaration revived the old, rejected Cold War-era libel that 'Zionism is racism,' an idea pushed at the UN by the Soviet Union in U.N. General Assembly Resolution 3379, which was repealed by the UN after the collapse of the USSR in 1991.

'The Durban Declaration encourages the hatred of Jews,' said Anne Bayefsky, director of the Touro Institute on Human Rights and the Holocaust, and president of Human Rights Voices, in a statement Friday to the UN Human Rights Council. 'Everyone who was there at its creation (as I was) knows that. Antisemites manufacture tools to spread intolerance by manipulating current events, appropriating the history of others, inverting right and wrong. Durban is such a tool.'...

And on Friday, March 19, the U.S. led over 150 countries in drafting and approving a statement on racial discrimination that cited the 2001 Durban declaration as a positive precedent to guide efforts to combat racism.

U.S. Acting Assistant Secretary of State for Democracy, Human Rights and Labor Lisa Peterson said: 'Recalling the twentieth anniversary of the adoption of the Durban Declaration and Program of Action,  we are committed to working  within our nations and with the international community to address and combat racism, racial discrimination, xenophobia, and related intolerance, while upholding freedom of expression.'...

The U.N. is expected to commemorate the Durban conference in 'Durban IV' in September at its new session in New York.