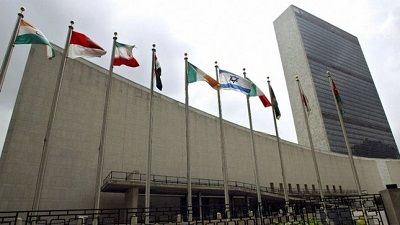 United Nations Headquarters (File photo)
"President Joe Biden regards himself as a champion of decency. He is equally committed to reengaging with international institutions. Assuring decency toward Israel in United Nations fora would be a good way to demonstrate both...

There is nothing decent about the fact that over 60% of UN General Assembly resolutions condemning the behavior of states are addressed toward Israel. There are too many gross violations of human rights to count in Darfur, the Central African Republic, Iran, North Korea, Russia, China, and almost everywhere else in the majority of states that are not liberal democracies. Often, the initiators of the resolutions condemning Israel are themselves some of the world's worst human rights offenders.

But the General Assembly is only the tip of the iceberg of indecency within the UN.

A recent report published by a supposedly 'professional' UN body, the UN Conference on Trade and Development (UNCTAD), makes clear just how much work President Biden's staff will have to do to assure both decency and a commitment to international institutions when it comes to Israel.

The quest for decency begins with the title of the report itself, which, together with an executive summary, was widely disseminated in media outlets: 'Economic costs of the Israeli occupation for the Palestinian people: the Gaza Strip under closure and restrictions.'

One can, of course, point out the falsity of the claim that Israel occupies the Gaza Strip, as Israel ended its control over the Gaza population in summer 1994 and withdrew from the Strip completely in 2005. The claim also fails to jibe with Hamas's boast that it liberated Gaza as the first step in the 'liberation of all of Palestine' (i.e., Israel's destruction). The sole Israeli who has violated 'the closure,' a person with a long history of mental illness, entered Gaza in 2014 and has been incarcerated there ever since. One might also wonder how, if Israel occupies Gaza (an area about the size of Manhattan), it was not able to prevent the launching from Gaza of over 14,000 missiles at Israeli population centers since the 2005 total withdrawal..."
Date
February 3, 2021
Title
President Biden, Assure Decency Toward Israel when Reengaging with Institutions, The Begin-Sadat Center for Strategic Studies
Original Source
https://besacenter.org/wp-content/uploads/2021/01/1915-Biden-Decency-Israel-Frisch-final.pdf
Attachment
Click here to view this article in MS Word/PDF format