Calling Israel an apartheid state is false and pointless 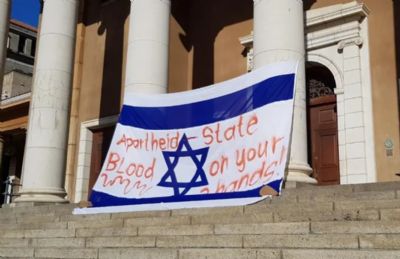 University of Cape Town at the start of Israel-Apartheid Week (photo credit: SAUJS/FACEBOOK)
"It is not exactly a novelty to see Israel labeled as an 'apartheid state.' The term has been bandied about for decades, but especially since the Durban conference in 2001. Recently, however, it has emerged with a vengeance with the publication of B'Tselem's paper that applies the term to the territories that came under Israeli control during the Six Day War in 1967, though now the organization contends that it applies in pre-1967 Israel as well. Picking up on that argument, Haaretz's Gideon Levy contends that Israel was only a democracy for about the first six months of its existence, but his analysis lacks perspective and context.

Utilizing a term like apartheid, which is popular with enemies of the Jewish state, implies congruence between the Israel of today and the South Africa of 1948-1994. The apartheid regime required strict separation between White and Black South Africans, an even more draconian separation than what the segregationist US South required. Not only were Black South Africans denied all kinds of basic civil rights, but there was no basis for the victims of such discrimination to claim relief from the government.

Second class citizenship is probably too generous a term to apply to their situation. Politics and government, commerce, public facilities, recreation, living areas, education, employment, marriage and social life were all strictly separate by law. What stood out was the fact that a relatively small minority was using these tools to keep control out of the hands of a large majority of the population.

Do analogies to Israel make any sense? Certainly not. All Israeli citizens, Jews and Arabs, have political and civil rights. The Arab minority is represented in the Knesset, Arabs serve as judges, including on the Supreme Court, there are Arabs in the diplomatic service, in the police and even in the army. Economic and educational opportunities are available to the minority, including higher education. Generally speaking, the areas in which South African apartheid applied are open to Arab Israelis. Has Israel achieved a state of total equality? Clearly not, but attempts to draw analogies to apartheid South Africa are wildly off the mark and frankly disingenuous..."
Date
January 25, 2021
Title
Calling Israel an apartheid state is false and pointless â opinion, The Jerusalem Post
Author(s)
Harold Waller
Original Source
https://www.jpost.com/opinion/calling-israel-an-apartheid-state-is-false-and-pointless-opinion-656661
Attachment
Click here to view this article in MS Word/PDF format