Palestinians Reignite 'Zionism is Racism' Lie at the UN 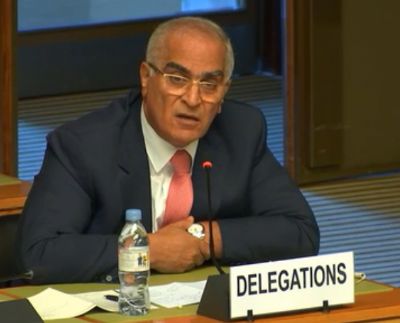 Palestinian representative to the U.N. in Geneva Ibrahim Khraishi, August 14, 2019
"At a United Nations panel on racism, the Palestinian Authority re-invoked the decades-old charge that 'Zionism is racism' and further claimed that Israel is 'weaponizing' antisemitism in order to prevent the Palestinians from having their own state.

'What we face is the Zionist movement,' PLO Ambassador to the UN in Geneva Ibrahim Khraishi said. 'I would like to remind you that in 1975, the General Assembly adopted Resolution 3379, indicating that Zionism is a form of racism. That is the root of the problem that we face.'

The 1975 resolution was repealed in 1991 by the UN, a fact that Khraishi failed to mention.

Khraishi made his remarks at the end of a panel, the first of its kind, investigating the PA's record on discrimination and racism.

According to Khraishi, the Palestinians are the 'victims' of Zionism.

'It was the Zionist movement that was behind the creation of the State of Israel,' Khraishi said..."
Date
August 14, 2019
Title
Palestinians Reignite ‘Zionism is Racism’ Lie at the UN, Breitbart News
Author(s)
Deborah Danan
Original Source
https://www.breitbart.com/middle-east/2019/08/14/palestinians-reignite-zionism-is-racism-lie-at-the-un/
Attachment
Click here to view this article in MS Word/PDF format