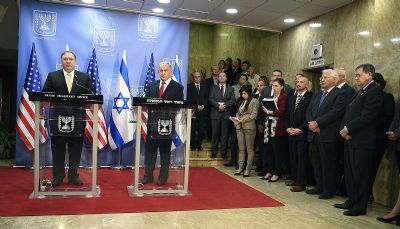 Secretary of State Mike Pompeo alongside Israeli Prime Minister Benjamin Netanyahu (File photo courtesy of Wikimedia Commons)
"President Trump's recognition of Israeli sovereignty over the Golan Heights was met with condemnation from the European Union and others. Leaders called the move 'invalid,' 'illegitimate' and 'absolutely worthless.' United Nations Secretary-General Antonio Guterres called Israel's 1981 annexation of the Golan "null and void and without international legal effect." These assertions are baseless.

Virtually every nation cited U.N. Security Council Resolution 242, which outlined a framework for achieving peace in the Middle East. The preamble speaks of 'the inadmissibility of the acquisition of territory by war.' Yet President Trump's Golan proclamation is entirely consistent with Resolution 242.
...
Resolution 242 calls on the parties to negotiate a just and lasting peace, one that recognizes the right of all countries, including Israel, to live 'within secure and recognized boundaries free from threats or acts of force.' It provides that Israel would withdraw from some-but not necessarily all-territory captured in 1967 in keeping with that objective. Some of Israel's former enemies pursued peace in good faith, and Israel has withdrawn from more than 88% of the territory it captured in 1967-most notably the Sinai Peninsula, pursuant to the 1979 Camp David Accords with Egypt.

Syria is a different story. In word and deed, Damascus has for 52 years rejected the negotiating framework of Resolution 242. It has maintained a state of war with Israel since Israel became independent in 1948. It is a client of Iran and one of the most brutal regimes on earth. By affirming Israel's sovereignty over the Golan Heights, the president has afforded Israel the only secure and recognized boundary that can exist under the circumstances-the objective of Resolution 242..."
Date
May 14, 2019
Title
International Law Backs The Trump Golan Policy, Wall Street Journal
Author(s)
Michael R. Pompeo and David Friedman
Original Source
https://www.wsj.com/articles/international-law-backs-the-trump-golan-policy-11557875474
Attachment
Click here to view this article in MS Word/PDF format