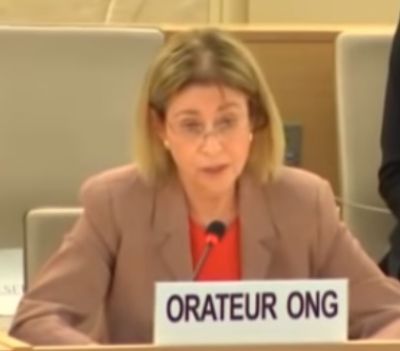 Anne Bayefsky, the Director of the Human Rights Voices NGO and the Touro Institute and Human Rights and the Holocaust, attempted to give a rebuttal to the testimony of Canadian Law Professor Michael Lynk, who accused Israel of using disproportionate force against peaceful protesters during the 'March of Return' riots along the Gaza border over the last year.

Human Rights Council President Coly Seck, of Senegal, interrupted Bayefsky twice as she delivered her remarks. In addition, the audio of her remarks was cut off, preventing much of her points from being heard.

Bayefsky was the only speaker to be interrupted during the debate by the Human Rights Council President.

Bayefsky slammed Council President Seck for refusing to allow her to speak as he had allowed all other speakers.

"The contrast between the outside and the inside of the United Nations today was wild. At the UN 'Human Rights' Council, I attempted to draw attention to the horrible murder of Ori Ansbacher because she was a Jew, and the absence of any mention of her by the UN's Israel investigator who claimed he was reporting on the 'current human rights situation.' The Council President's response? He cut my mic! He interrupted me twice, calling my remarks naming the Council 'expert's' analogies of Israelis to Nazis 'insulting.' I 'insulted' anti-Semites by attempting to draw attention to their anti-Semitism. As I would have ended my statement - if I had been allowed to speak - At this UN, anti-Semitism is not a problem. It's a human right," she said.

The following are the full remarks Anne Bayefsky attempted to deliver at the United Nations Human Rights Council in Geneva:

In another embarrassment to Canadians and the University of Western Ontario Law School, Professor Michael Lynk has produced a series of antisemitic lies:

Lie One: the Gaza so-called "demonstrations" have been "largely peaceful"

Lie Two: Palestinians may not have launched explosives and incendiary devices into Israel

Lie Three: the purpose of what are actually riots is the right to "return" con, not Hamas' stated goal to lay waste the Jewish state.

Modern anti-Semitism operates through the UN, this Council, and its newest echo chamber, Democrats in the U.S. House of Representatives â this way:

There is a real-life final step to this anti-Semitic UN formula. More Jews die. Early this year 19 -year-old Israeli Ori Ansbacher was raped and butchered by a Palestinian because she was a Jew. Her murderer is now entitled to a Palestinian reward.

Ori isn't mentioned in the Lynk report on the "current human rights situation." Nor is any Palestinian terror, or fiery devastation of forests and farms. Instead, Lynk brags his report only "focuses on violations committed by Israel."

At this UN, anti-Semitism is not a problem. It's a human right."
Date
March 18, 2019
Title
Pro-Israel voices silenced at the UN, Arutz Sheva
Author(s)
Gary Willig
Original Source
https://www.israelnationalnews.com/News/News.aspx/260536
Attachment
Click here to view this article in MS Word/PDF format