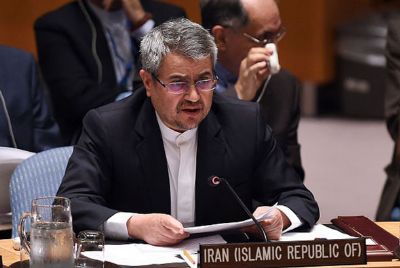 Iranian ambassador to the UN Gholamali Khoshroo (File photo)
The topic of "Measures to eliminate international terrorism" was opened at the UN General Assembly today by the leading state sponsor of terrorism, the Islamic Republic of Iran. And Iran didn't speak alone. The 119 UN states that are members of the so-called "non-aligned movement" (NAM) gave Iran the power to speak as their voice.

The spectacle of the UN majority embracing a global terrorist took place in the UN's Legal Committee, a committee of the whole comprised of all 193 UN member states.

Iran's statement was delivered by Iranian Ambassador Gholamali Khoshroo on October 2, 2017 at the UN's New York headquarters. His remarks read as a terrorist manifesto. He claimed his brand of death and destruction was just a "legitimate struggle" and America's fight against terrorism was "psychological and political terrorism." (He was referring to the U.S. practice of listing countries - like Iran - as "terrorism sponsoring States.")

The UN still has no definition of terrorism - precisely because terrorists and their enablers define today's UN.

"We would like to stress that terrorism should not be equated with the legitimate struggle of peoples under colonial or alien domination and foreign occupation, for self-determination and national liberation. The brutalization of peoples remaining under foreign occupation should continue to be denounced as the gravest form of terrorism, and the use of State power for the suppression and violence against peoples struggling against foreign occupation in exercising their inalienable right to self-determination should continue to be condemned. The Movement reaffirms its principled position under international law and in accordance with General Assembly resolution 46/51 of 9 December 1991 as well as other relevant UN resolutions on the legitimacy of the struggles of people under colonial or alien domination and foreign occupation for national liberation and self-determination.
...
The Non-Aligned Movement rejects actions and measures, the use or threat of use of force, imposed or threatened to be imposed by any State against any Non-Aligned Member Country under the pretext of combating terrorism or to pursue its political aims, including by directly or indirectly categorizing them as terrorism sponsoring States, and totally rejects the unilateral preparation of lists accusing States of allegedly supporting terrorism, which are inconsistent with international law and constitute on their part a form of psychological and political terrorism."
Date
October 2, 2017
Title
UN Allows Iran, the Leading State Sponsor of Terrorism, to Open UN’s Annual Debate to “Eliminate” Terrorism