Hezbollah Is Running Rings Around U.N. Monitors in Lebanon 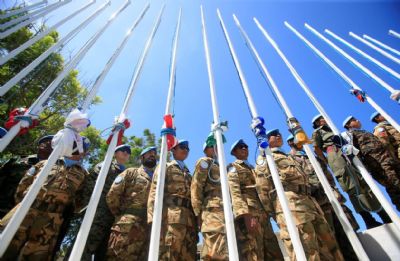 UNIFIL peacekeepers
"Over the past year, I have given dozens of United Nations ambassadors tours of Israel's border with Lebanon. During a recent visit with my American counterpart, Nikki Haley, Israel Defense Forces officers identified Hezbollah positions along our northern border.

Our guests appropriately asked where the U.N. Interim Force in Lebanon was, and why nothing was being done to stop Hezbollah terrorists from blatantly violating numerous Security Council resolutions.

Our answer was simple. The Unifil force is there, but they are not effectively fulfilling their mandate. The good news is that when Unifil's mandate comes before the Security Council later this month, there are practical steps that can be taken to ensure that this important U.N. force succeeds and another conflict with Hezbollah is avoided.

Unifil was established in 1978 with the goal of restoring 'international peace and security' and assisting the Lebanese government in extending its authority over southern Lebanon. The force was altered in 1982 after the First Lebanon War and again in 2000 when Israel completed its withdrawal from Lebanese territory.

In August 2006, following the Second Lebanon War and the subsequent Security Council Resolution 1701, Unifil's mandate expanded to include monitoring the cease-fire. Most importantly, Unifil was charged with ensuring that the territory south of the Litani River remained free of weapons and fighters other than the Lebanese army.

Unfortunately, these efforts have failed. Over the past year alone, we have shared with the Security Council new information detailing how border towns have become Hezbollah strongholds. One out of three buildings in the village of Shaqra is now being used to store arms or launch attacks on Israel. We also shared with the council intelligence revealing how the Iranians use civilian airlines to smuggle dangerous arms into southern Lebanon. When the Second Lebanon War ended, Hezbollah had around 7,000 rockets. Today, they have more than 100,000...

To rectify this situation, and avoid a new conflict, the Security Council must make real changes to Unifil's mandate. In addition to generally improving Unifil's performance, the council should insist on three vital steps. First, Unifil must increase its presence in the territory... Second, Unifil must report all violations of Resolution 1701... Third, the Unifil forces must insist on unlimited access to all suspicious installations under their mandate...

[T]he Security Council must step up its efforts to ensure that Unifil's renewed mandate fulfills the goals outlined above. Failing to do so will call into question the efficacy of this U.N. peacekeeping force and endanger the lives of innocent Israelis and Lebanese."
Date
August 20, 2017
Title
Hezbollah Is Running Rings Around U.N. Monitors in Lebanon, The Wall Street Journal
Author(s)
Danny Danon
Original Source
https://www.wsj.com/articles/hezbollah-is-running-rings-around-u-n-monitors-in-lebanon-1503258487
Attachment
Click here to view this article in MS Word/PDF format