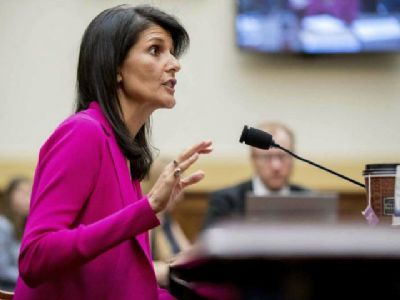 U.S. Ambassador to the UN Nikki Haley
"Nikki Haley, President Donald Trump's envoy to the United Nations, will travel to Vienna next week to discuss the US government's concerns about the Iran nuclear deal with the International Atomic Energy Agency (IAEA). The high-profile visit comes as the former South Carolina governor has staked out a hard line on Iran and sharply pro-Israel positions, perhaps with an eye to her own future political ambitions.

Haley will hold meetings with IAEA leaders and experts in Vienna on Wednesday, the US mission to the UN confirmed to Al-Monitor.

'She will meet with IAEA leadership, Iran safeguards experts and others,' a spokesperson said...

Haley, ahead of the trip, signaled she was skeptical of Iran's compliance with the deal, and vowed the Trump administration would not be held hostage to it.

'Iran cannot be allowed to use the nuclear deal to hold the world hostage,' Haley said in a press statement Tuesday, after Iranian President Hassan Rouhani threatened to leave the accord if the Trump administration tacks on more sanctions. 'Iran, under no circumstances, can ever be allowed to have nuclear weapons. At the same time, however, we must also continue to hold Iran responsible for its missile launches, support for terrorism, disregard for human rights and violations of UN Security Council resolutions.'

'The nuclear deal must not become 'too big to fail,' she added.

Haley's visit to the UN atomic watchdog comes ahead of a series of key deadlines for the Trump administration to decide if it will continue to honor US commitments under the nuclear accord. A decision on suspending nuclear-related US oil sanctions is due by Sept. 14. The next quarterly deadline for the Trump administration to certify Iran's compliance with the accord is Oct. 15..."
Date
August 17, 2017
Title
Haley to press IAEA on Iran deal compliance, Al Monitor
Author(s)
Laura Rozen
Original Source
http://www.al-monitor.com/pulse/originals/2017/08/nikki-haley-un-press-iaea-iran-deal.html#ixzz4q77y6G77
Attachment
Click here to view this article in MS Word/PDF format