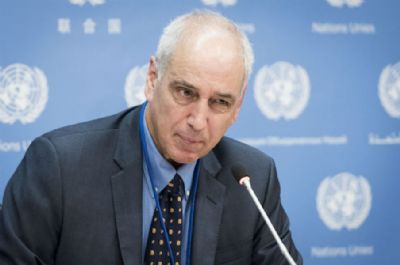 Lynk specifically lists Palestinian "human rights defenders" who he alleges have faced "interference" with their right to peacefully protest, and "who all engage in non-violent activity." In fact, among those listed are individuals with violent and highly antisemitic records.

Manal Tamimi â Described only as a "leader of a protest movement" and "field researcher" by Lynk, Tamimi is in fact a notorious antisemite and, whose social media accounts are filled with: Issa Amro â Charged with 4 counts of attacks on Israelis, including one in which Amro "violently attacked a civilian, forcibly took the victim's camera, and then destroyed the camera by smashing it on the ground, all while while spitting on the victim."

Salah Khawaja â Described only as a "member of the secretariat of the Boycott, Divestment and Sanctions (BDS) National Committee in Lynk's report, Khawaja is in fact an "an active member of the blacklisted Popular Front Liberation Party," which is considered a terrorist organization by the United States and the European Union.

Lynk's report concludes with recommendations, including calling on Israel to "[a]ctively combat incitement against the work of human rights defenders," but makes no mention of Palestinian incitement to terrorism, including that of the so-called "human rights defenders" listed in his report.
Date
March 16, 2017
Title
Report of the Special Rapporteur on the situation of human rights in the Palestinian territories occupied since 1967, Michael Lynk, A/HRC/34/70, Office of the High Commissioner for Human Rights
Original Source
http://www.ohchr.org/EN/HRBodies/HRC/RegularSessions/Session34/Documents/A_HRC_34_70_AUV.docx
Attachment
Click here to view this document in MS Word/PDF format