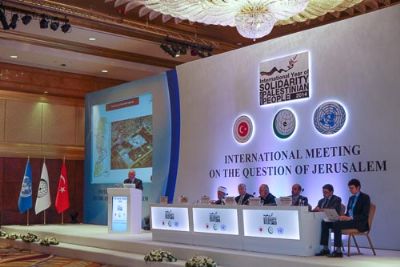 UN "International Meeting on the Question of Jerusalem", Ankara, Turkey
Yet another UN meeting on Israel proved the perfect opportunity for the head of the 57-member Islamic group of states to call for an "end" to Israel as one more "apartheid" state.

Iyad bin Amin Madani, Secretary General of the Organization of Islamic Cooperation (OIC) was speaking on May 12, 2014 in Ankara at "The International Meeting on the Question of Jerusalem" organized by the UN "Committee on the Exercise of the Inalienable Rights of the Palestinian People." This UN Committee was created in 1975 to implement the infamous Zionism-is-racism General Assembly resolution.

He said: "On this occasion we need to recall how it was only through an international, unified and firm stand that the Apartheid regime in South Africa was brought to an end. Accordingly, Israel's reversal of its illegal practices is contingent on its realizing that there is a price to pay for its transgressions, and that the world can no longer put up with its practices."

Albeit the UN secretariat routinely explains away criticisms of the UN as the fault of member states, Robert Serry UN Special Coordinator for the Middle East Peace Process - speaking on behalf of Ban ki-Moon - said he was "pleased to send greetings to all participants" and "thanked" the Committee, the Government of Turkey and the Organization of Islamic Cooperation "for organizing" the event.

The day also clarified a central feature of UN-based antisemitism: the very existence of Israel from 1948 is the root cause of the Arab-Israeli conflict, not the1967 so-called occupation. These UN conferences also make no effort to mask antisemitism, and attacks on "Judaization" - the crime of a Jew on Arab-claimed land. The proceedings on the first day alone included, for example:
Date
May 12, 2014
Title
Islamic states use latest UN event to call for an “end” to “apartheid Israel”
Original Source
http://www.un.org/depts/dpa/qpal/docs/2014Ankara/Opening%20HE%20Mr%20Iyad%20bin%20Amin%20Madani%20printing%20%20ENGLISH.pdf
Attachment
Click here to view this document in MS Word/PDF format