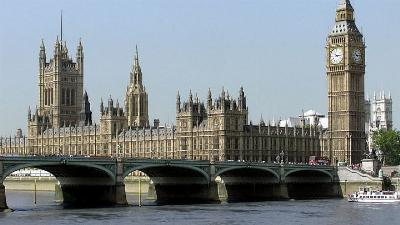 U.K. Houses of Parliament (File photo courtesy Wikimedia Commons)
"... Lord Polak (Conservative): â¦ I welcome the Governmentâs commitment in the gracious Speech to stopping public bodies imposing their own approach or views about international relations by preventing boycott, divestment and sanctions campaigns against foreign countries. The Government made it clear that legislation is required to address concerns that such boycotts may legitimise anti-Semitism. I ask my noble friend the Minister, in this context, to go one step further. I am sure it has not gone unnoticed by my noble friend that in recent days, our close friends the United States, Canada and Australia have all pulled out of Durban IV. On 6 May, the Canadian Member of Parliament Anthony Housefather said that Ottawa has confirmed that it will avoid the gathering in South Africa known as Durban IV, which, he says, 'continues to be used to push anti-Israel sentiment and as a forum for anti-Semitism.'

I raised this issue in this Chamber on 22 April and asked if the Minister would confirm that the UK would not attend Durban IV. I did not receive an answer, so, in posing this question again, I will add only this: what is it that the FCDO [Foreign, Commonwealth and Development Office] knows better than its counterparts in the United States, Canada and Australia? Perhaps, I could put it a different way: what is it that those three countries understand that the FCDO does not?...

Baroness Deech (Crossbench): â¦ Will the Minister proscribe Hamas in full to curb its actions? The other action this country can take in order to calm the atmosphere is to withdraw from the forthcoming follow-up conference of the Durban racism conference of 2001. That conference degenerated into a hate-filled anti-Semitic meeting uniquely critical of Israel, giving cover to the real human rights abusers of the world. Attendees at the conference compared its anti-Jewish hysteria to 1930s Germany. The track record of Durban has been to harm race relations, poison progress and encourage anti-Jewish conspiracy theories and attacks. The USA, Australia and Canada have withdrawn from the Durban conference, and it is expected that other democratic countries will also do so, judging by their nonparticipation in previous follow-up conferences. I join the noble Lord, Lord Polak, in asking the Government to act to curb vicious anti-Semitism disguised as anti-Israel activity. Will the Government withdraw from Durban right now?"
Date
May 24, 2021
Title
House of Lords Debate on the Queen’s Speech, Scottish Council of Jewish Communities Political Affairs Digest
Original Source
https://www.scojec.org/pad/2021/v/21v20.pdf
Attachment
Click here to view this document in MS Word/PDF format