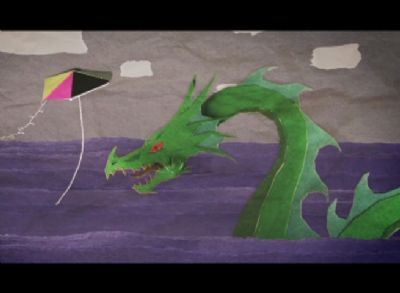 Scene from "Flying Paper"
On May 21, 2014 the UN screened a film in which Israel is depicted as a green monster that attacks a kite created by hapless Palestinian children just yearning for freedom. As filmmaker Nitin Sawhney unabashedly explained to his UN audience: "the dragon was an Israeli gunship and the kite became the persona of the child trying to deal with that." The imagery of Jews as serpents was a frequent tool of Nazi propaganda.

The screening of "Flying Paper" was held at UN headquarters in New York City, and was advertised by the UN as "a documentary on Palestinian youth in the Gaza Strip." The event was organized by the "Committee on the Exercise of the Inalienable Rights of the Palestinian People," created in 1975 to implement the notorious Zionism-is-racism General Assembly resolution.

The trailer for the documentary says "it's a story about Palestinian's creative resilience". More specifically, its creative antisemitism includes: a segment with "interviews with a fisherman from the Gaza seaport, who pleads with the Israeli navy to stop destroying his livelihood - the Israeli vessels are replaced with a giant, dragon-like sea monster which bites and lunges at the kite."

According to the film's promotional material, the film "tells the story...despite the blockade, of creative resistance and freedom."

Palestinian "resistance" in the form of kidnapping, mortar and rocket attacks against Israelis - as opposed to children flying kites - is never mentioned.

As is the usual fare of Palestinian propaganda, the film's directors talk about "the blockade" and the "siege" in a vacuum, with no references to the repeated and ongoing attempts to use Gazan waters, tunnels and all other access points, to provide lethal weapons to Palestinian terrorists.

The film also includes scenes of a kite "entangled in a barbed-wire fence," and a kite "homed in on by an Israeli drone, and caught up in its computerized crosshairs."

The co-directors have obligingly explained the film's agenda to anyone who might have thought it was about kites. "Nitin [Sawhney] co-founded a nonprofit initiative called Voices Beyond Walls to conduct digital video and storytelling workshops with children and youth in Palestinian refugee camps in the West Bank and Gaza. Flying Paper is his first feature-length documentary film. Speaking about the workshops, he said the children were trained to make films themselves. 'It gave them an opportunity to tell stories about their detention, prisons and what they went through during their war...Flying Paper catches the simple act of flying kites...and breaking out of the occupation...'"

Israel-bashing reviewers have got the message - as has the UN audience: "The idea of a kite is much more for children experiencing living in a big prison."

Actually, the real prison is Palestinian antisemitism, persistent rejection of a Jewish state, and self-declared war with their Jewish neighbors for the last 66 years.

The film's co-director Nitin Sawhney, has a long history of anti-Israel bias and antisemitism. For instance, he has been a member of the steering committee of the US Campaign to End the Israeli Occupation, an organization that laments "Israeli-controlled media" that is allegedly standing in the way of access to information about "Israeli apartheid."

In 2008, Sawhney established the international Expressions of Nakba Exhibition. The Exhibition's web-site describes the creation of the State of Israel as follows:

"Learn About the Nakba...In May 1948, Israel was declared a "Jewish state" despite the fact that the overwhelming majority of the indigenous population consisted of Palestinian Arabs, and the Jewish population was composed primarily of new immigrants...Zionist leader David Ben Gurion instituted "Plan Dalet" in order to change the demographic make-up of historic Palestine... As a result, thousands of Palestinians were massacred ..."

It is obvious why an anti-peace radical like Sawhney made a film about Israeli monsters. It is inexcusable that the United Nations disseminates his message.
Date
May 21, 2014
Title
UN Headquarters Screens Film Depicting Israel as Green Monster
Original Source
http://unispal.un.org/databases/dprtest/ngoweb.nsf/f12fded4d0597000852573fc005b9471/ec35ea81c8d90a9d85257cd900673a7c?OpenDocument