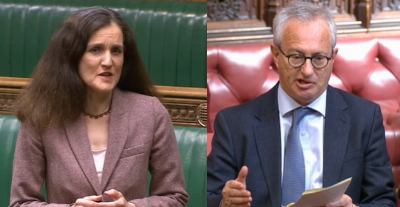 Mrs Villiers noted that 'the 2001 UN Conference Against Racism in Durban degenerated into hatred, antisemitism and criticism of Israel that was excessive, disproportionate and unfair'. She asked: 'Will the UK Government boycott Durban IV, which marks the 20th anniversary of that disgraceful 2001 conference?'

Foreign Secretary Dominic Raab said the UK 'will not support any partisan or political attacks on Israel' and underlined that the Government is 'absolutely crystal clear in our condemnation of and opposition to any and all forms of antisemitism'.

In 2011, then-Prime Minister David Cameron boycotted the Durban III conference to mark the 10th anniversary, and the UK voted against the 31st December 2020 General Assembly resolution to convene Durban IV.

In his speech in the House of Lords debate on the Integrated Review, Lord Polak echoed calls for the UK not to attend Durban IV and urged the UK to proscribe the Islamic Revolutionary Guard Corps (IRGC) as a terrorist organisation."
Date
April 23, 2021
Title
UK Government urged to boycott Durban IV commemoration in September, Conservative Friends of Israel
Original Source
https://mailchi.mp/cfoi/c07qiruwik-970597?e=f3594eadba
Attachment
Click here to view this article in MS Word/PDF format