Israeli Ambassador Danon to U.N. Security Council: Israel's connection to Jerusalem was never broken by the Romans, Babylonians, Ottomans, British, and NOT by the U.N.! 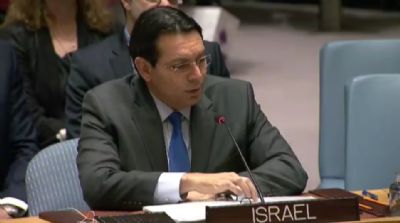 "Today, the United Nations has taken another step backwards. Another step away from advocating for truth and justice.

Almost exactly one year ago, in this very same room, this body adopted the shameful resolution 2334. It was a resolution that had the audacity to try to designate Israel's presence at the Western Wall, at Judaism's holiest site in Jerusalem, as a flagrant violation of international law.

Those words pierced the hearts of Jews everywhere. They mocked the generations of Jews who prayed toward Jerusalem for thousands of years. They belittled the ancient declaration of the Jewish people that states, 'next year in Jerusalem.'

Yet here we are again. We still find ourselves fighting the same battle for truth and morality.

Those who voted for today's resolution have only reaffirmed the UN's decades-long double standard when it comes to Israel. They are guilty of blatant hypocrisy.

Every other country in the world has the right to designate its capital city.

But when it comes to Israel, somehow this most basic national right is questioned and condemned.

We thank the United States for staying loyal to the truth and vetoing this absurd resolution.

President Trump, Vice President Pence, Ambassador Haley, and the entire administration proved that the United States does not back down from what's right. They continue to advocate for real dialogue, and a hope for peace in our region...

Let me be clear. We will continue to stand strong. When it comes to Jerusalem, we do not back down.

3000 years ago, King David declared the city of Jerusalem the capital of the Jewish people. Jerusalem has been Israel's capital for almost 70 years. Our nation has never given up when faced with adversary. We will not allow others, including the United Nations, to determine our fate, especially when it comes to Jerusalem.

Not then, and not now.

This week, Jews all over the world are celebrating the holiday of Hanukah. We welcome the good wishes sent from so many nations, many of whom are represented at this table today. But it seems that some of those who wish us well have forgotten exactly why we celebrate Hannukah.

In the year 167 B.C.E., a Hellenist King attempted to outlaw Jewish practice and desecrate our temple in Jerusalem. But he failed. A small group of brave fighters â the Maccabees, we call them in Hebrew â drove out the Hellenists and reclaimed Jerusalem.

That is what we are celebrating. That is why we light the candles. We are honoring our brave ancestors who reinstated Jewish sovereignty, more than 2000 years ago, over our capital, Jerusalem.

History did not always turn out that way for our people. Just 100 years after the miracle of Hanukah, our Temple in Jerusalem was destroyed. The Jewish people were exiled from Jerusalem.

Today, even as our adversaries are, once again, seeking to delegitimize our presence in Jerusalem, the Jewish people will prevail, as we always have...

Last year, at this Council, you voted on resolution 2334. I held up a bible and reminded you of thousands of years of Jewish history and presence in Jerusalem.

This year, with another resolution attempting to deny truth, we will fight back once more!

Members of this Council can vote again and again â hundreds and hundreds more times to denounce our presence in Jerusalem.

But you will never succeed in changing the bible. You cannot rewrite history.

Not long ago, the Lubavitcher Rebbe, a wise Jewish leader, called the UN a house of darkness and lies.

But he also noted that with just one small candle of truth, one could turn that darkness into light.

We will continue to light that candle of truth..."
Date
December 18, 2017
Title
Statement by Israel on Draft UN Security Council Resolution on Jerusalem, Permanent Mission of Israel to the United Nations
Attachment
Click here to view this article in MS Word/PDF format