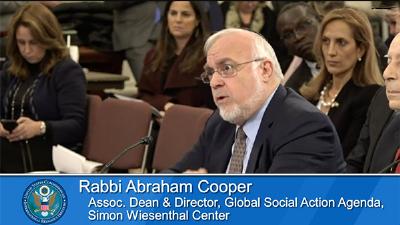 "The Simon Wiesenthal Center (SWC), a leading global Jewish human rights NGO, is urging German Foreign Minister Heiko Maas to add Germany to the growing list of democracies, including the US, Canada, and Australia, which will not participate in a United Nations event celebrating the 20th anniversary of the ill-fated World Conference Against Racism held in Durban South Africa in August 2001.

'Foreign Minister Maas, you have said often that Auschwitz is what motivated you to take the lifeâs path that you have pursuedâ¦

'Tragically, an international conference designed to bring human rights NGOs and diplomats together to fight hate, instead rapidly descended into the worst public display of anti-Semitism since the defeat of Nazi Germany.

'I know, because together with my colleague Dr. Shimon Samuels, I served as a spokesman for the Jewish organizations who came from all over the world to participate.

'We were physically attacked by Iranian activists, cursed by Hezbollah (!) delegates and watched as more than 3,500 delegates of civil society labeled Israel an apartheid state, removed references to the firebombing of Synagogues in France, and denounced Zionism.

'On Friday morning, I was told by the chief of police that they could not guarantee the safety of Jewish delegates to walk three blocks to the Jewish Community Center, as 20,000 protesters had been brought in to protest against Zionism. I saw the banner held aloft âHitler was right!â and witnessed the distribution of The Protocols of Zionâ¦

'The Simon Wiesenthal Center urges you to add Germanyâs important voice and declare that your nation will not attend or participate in any way in honoring a conference that 20 years ago brought dishonor to the United Nations and helped legitimize genocidal hatred of the Jewish people and the State of Israel.'

In a related development, the SWC is contacting Latin American countries to urge them not to participate in any commemoration of Durban."
Date
May 10, 2021
Title
Simon Wiesenthal Center In Direct Plea to German FM to Boycott UN Event Celebrating Anti-Semitic Hate Fest, The Jewish Voice
Original Source
https://thejewishvoice.com/2021/05/simon-wiesenthal-center-in-direct-plea-to-german-fm-to-boycott-un-event-celebrating-anti-semitic-hate-fest/
Attachment
Click here to view this article in MS Word/PDF format