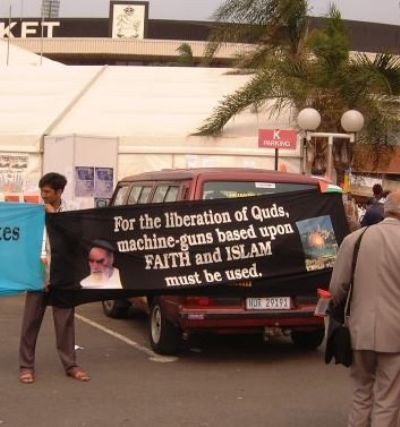 Protesters at the first Durban conference
"Several peers and Jewish groups have called on the UK to boycott an upcoming event commemorating a 2001 anti-racism conference in South Africa tainted by antisemitism claims. Both the US and Israel walked out of the 2001 meeting in Durban, South Africa, over antisemitism concerns and amid attempts to label Zionism as racist.

The UN will be marking the 20th anniversary of the event and its outcome - the adoption of the Durban Declaration and Programme of Action - in New York in September.

Several countries, including the US, boycotted revivals of the conference in 2009 and 2011.

A US State Department spokesperson told the Jerusalem Post this week Washington would not be attending commemorative events. Australia followed suit, the Israeli outlet reported. In exclusive comments to the JC, peers Baroness Deech and Lord Turnberg called on the UK to 'unequivocally' condemn and boycott the September commemoration.

'The inaugural 2001 UN anti-racism conference in Durban, South Africa degenerated into a hate-filled, antisemitic meeting vociferously critical of Israel to the detriment of legitimate anti-racism efforts.

'The parallel conference of NGOs hijacked the anti-racism agenda, using it as a forum to harass Israeli and Jewish participants, distribute antisemitic materials, including the Protocols of the Elders of Zion, and relentlessly condemn Israel. Attendees at the conference compared its anti-Jewish hysteria to â1930s Germanyâ.

'The NGOs were not alone. The governmental side of the conference resulted in the notorious âDurban Declarationâ which cast the Jewish state as a racist state and singled out Israel as the only country for specific condemnation,' they said.

Jewish Leadership Council co-CEO Claudia Mendoza and Board of Deputies interim-CEO Michael Wegier called on the UK to skip the event.

'The reasons for the UK staying away from Durban III remain true 10 years on and we are seeking confirmation that the UK will not dignify this yearâs commemoration with its attendance. This will be a signal that the Government takes a firm stand against anti-Jewish racism,' they said in a joint statement.

When asked to boycott the event by MP Theresa Villiers last month, Foreign secretary Dominic Raab said the UK would not 'support any partisan or political attacks on Israel.'

'In relation to the Durban declaration and its anniversary, let me reassure my right hon. Friend thatâas we demonstrated at the Human Rights Council recently on the approach that we took to items 7 and 2âwe will not support any partisan or political attacks on Israel. I reassure her that the Government are absolutely crystal clear in our condemnation of and opposition to any and all forms of antisemitism,' he told MPs."
Date
May 7, 2021
Title
Peers and Jewish groups call on UK to boycott event commemorating âantisemiticâ Durban conference, The Jewish Chronicle
Author(s)
Mathilde Frot
Original Source
https://www.thejc.com/news/uk/peers-and-jewish-groups-call-on-uk-to-boycott-event-commemorating-antisemitic-durban-conference-1.516479
Attachment
Click here to view this article in MS Word/PDF format