Oops, the UN 'found' another terror tunnel under UN school- Terror in the classroom runs deep 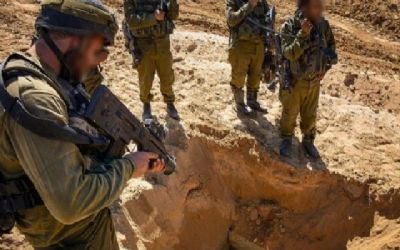 IDF forces at the entrance to an exposed Hamas tunnel (File photo)
"A Hamas-built terror tunnel was discovered under a school in Gaza two weeks ago...

Israel's Ambassador to the UN Danny Danon reacted harshly to the revelation of a terror tunnel under an UNRWA school.

'Yet another terror tunnel under an UNRWA schoolyard. This is what Hamas rule looks like and this is more proof of the double war-crime committed as terror tunnels are built to attack Israelis, while using the children of Gaza as human shields' said Danon.

'We cannot accept a situation in which UNRWA schools are used as terror bases. This dangerous incident must not be ignored and strict oversight is needed to ensure that UN facilities are not used to protect terrorists,' Danon added.

A UN inquiry into the 2014 Gaza war confirmed that at least three UNRWA schools were used by Palestinian terrorists to hide weapons and that rockets were likely fired from them on at least two occasions. UNRWA confirmed that 20 rockets were found in one of its vacant schools in Gaza, but nonetheless returned the deadly weapons to Hamas terrorists."