No One Does Anti-Israel Bias Quite Like the U.N. 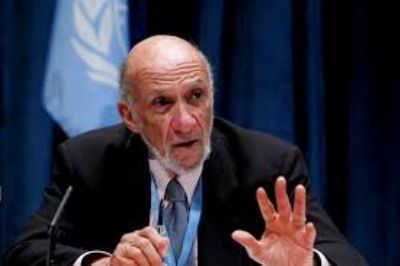 In the early days of the 1979 Iranian Revolution, Princeton professor Richard Falk was one of Ayatollah Khomeini's useful idiots. After meeting the future Iranian tyrant in Paris, Falk penned a New York Times op-ed praising him as an example for the rest of the third world to follow. Now, in 2017, Professor Falk has returned to praising the Ayatollah. 'I believe one of the lasting legacies of Imam Khomeini was to give authoritative priority to the Palestinian struggle,' he told the Iranian state news agency Tasmin News last week, before going on to stress the importance of showing that 'people of conscience believe that the Palestinian struggle is worth waging and can be won.'

What was Falk doing in the intervening years? Astonishingly, this Iranian sycophant, open supporter of 'the Palestinian struggle,' and 9/11 truther was for six years the United Nations Human Rights Council's (UNHRC) lead investigator of Israeli human-rights abuses in the Palestinian territories. (Israel is the only nation, of course, which has a permanent U.N. Special Rapporteur dedicated to investigating it.)

Falk was back in the news in March, after authoring a U.N. report accusing Israel of apartheid. Pressure from U.S. ambassador Nikki Haley caused the report to be withdrawn, in what amounted to a major embarrassment for the U.N. But what did the leaders of the world's foremost intergovernmental organization expect? In assigning Falk and people like him to adjudicate Israel's actions, they showed that the U.N. has stopped even trying to hide its anti-Israel bias. Falk is, after all, who he is: the type of academic anti-imperialist who cannot help but believe the best about third-world revolutionaries and the worst about advanced democracies...

With U.N. officials like that, the 'Israeli apartheid,' and 'ethnic cleansing' reports almost seem to write themselves."
Date
July 1, 2017
Title
No One Does Anti-Israel Bias Quite Like the U.N., National Review
Author(s)
Elliot Kaufman
Original Source
http://www.nationalreview.com/article/449164/un-anti-israel-bias-richard-falk-pro-iran-9-11-truther-investigates-jewish-state
Attachment
Click here to view this article in MS Word/PDF format