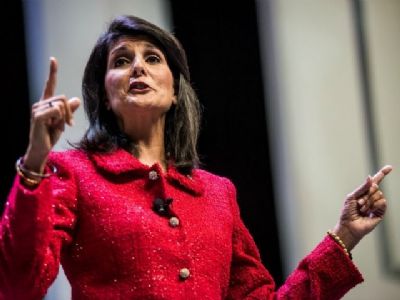 U.S. Ambassador to the U.N. Nikki Haley (File photo)
"U.N. Ambassador Nikki Haley announced Tuesday that she will travel to Israel after first addressing the notoriously anti-Israel Human Rights Council in Geneva â a body which the U.S. boycotted in March...

But the visit to Israel, taking place June 7-9 will be preceded by a visit to the controversial U.N. Human Rights Council in Geneva, Switzerland, on June 6 â the first address to the Council by a U.S. Permanent Representative to the U.N.

Later that day, Haley will give a speech at the Graduate Institute in Geneva where she will 'lay out the U.S. position on future involvement' in the Council and address 'the benefits and the failings of the Council with respect to the vital mission of defending millions of people against the world's worst cases of human rights abuse.'

The U.S. boycotted the opening session of the Council in March over its explicitly anti-Israel agenda. State Department spokesman Mark Toner said that one particular agenda item â 'Human rights situation in Palestine and other occupied Arab territories' â was 'yet another reminder of that body's long-standing bias against Israel.'

The Bush administration declined to join the Council when it formed in 2006 as a successor to the Human Rights Commission, which the U.S. had also declined to join. However, the Obama administration applied for membership, claiming it would be easier to reform from the inside. But such reform efforts were scarce..."
Date
May 31, 2017
Title
Nikki Haley to Visit Israel After Showdown with Anti-Israel U.N. Human Rights Council in Geneva, Breitbart News
Author(s)
Adam Shaw
Original Source
http://www.breitbart.com/national-security/2017/05/30/nikki-haley-visit-israel-showdown-anti-israel-un-human-rights-council/
Attachment
Click here to view this article in MS Word/PDF format