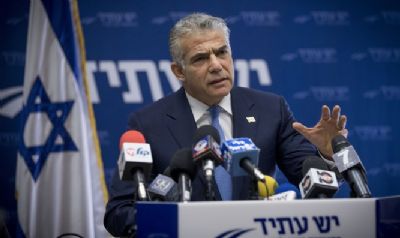 The entire report 'is full of hatred and anti-Semitism,' Lapid said.

'Instead of an organization which defends freedom, democracy and liberal values, the UN has turned into a collaborator with terrorist organizations. Does anyone think it makes sense that a UN agency in which Syria and Sudan are members will preach morality to the State of Israel - the only democracy in the Middle East that protects the rights of its minorities and provides humanitarian aid to its enemies?' he continued.

'Europe and the United States must make it unequivocally clear that as long as the campaign of incitement by the UN and its institutions against Israel does not stop, they will stop supporting this organization that has long ago ceased to fulfill its role.'

Lapid added, 'This week I held a series of meetings in Washington aimed at stopping the funding to the UN and convincing the United States to withdraw from the UN Human Rights Council and its annexes, and I will continue to do so until that happens.'..."
Date
March 16, 2017
Title
Lapid: UN Has Become a Terrorist Collaborator, Arutz Sheva
Author(s)
Nitsan Keidar
Original Source
http://www.israelnationalnews.com/News/News.aspx/226782
Attachment
Click here to view this article in MS Word/PDF format