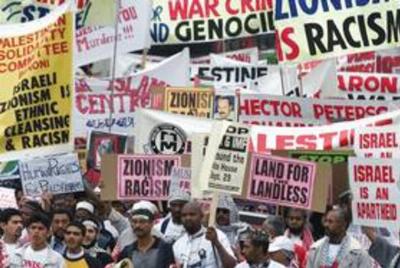 A protest at the 2001 Durban Conference (File photo)
"Leading Jewish groups applauded the Netherlandsâ decisionâ to join a growing number of countries â including the UK, the US and Australia â in boycotting the upcoming Durban IV conference, citing an 'unacceptable â¦ risk of repetition of abuse of this platform for antisemitic expressions.'

The UN is scheduled to hold a Sept. 22 event marking the 20th anniversary of the World Conference on Racism in Durban, South Africa, from which the US and Israel previously withdrew over objections of anti-Zionism. Israel was singled out from the original Durban conference declaration and was depicted as committing 'crimes against humanity,' 'ethnic cleansing,' 'apartheid' and 'genocide' against the Palestinians.

'The Netherlands does not intend to participate in the Durban IV conference, given the historical burden of the Durban process, the risk of repeated abuse of this platform for antisemitic expressions and the disproportionate and one-sided attention to Israel as reflected in the original Durban declaration,' Dutch Foreign Minister Sigrid Kaag said on Wednesday. 'This is unacceptable. The Netherlands remains committed to the fight against antisemitism.'

Leading Jewish groups welcomed Netherlandâs decision to join the UK, US, Australia, Canada, Hungary and Israel in not attending the anniversary event. The European Jewish Congress praised the Dutch government for deciding to boycott the upcoming 'antisemitic' Durban conference.

'We thank the Netherlands for announcing that it, like other key democracies, wonât participate in the UNâs commemoration of the 20th anniversary of the Durban conference tarnished by antisemitism,' Bânai Bârith International commented. 'The UN and the fight against racism must never be used as cover for hate.'

Commenting on the Dutch pullout from the conference, the American Jewish Committee (AJC) said that 'no country should attend an event tainted by a legacy of Jew-hatred.'

Kaag also pledged that the Netherlands would remain committed to combating bigotry, in the UN and beyond.

'This month, for example, the Netherlands will make a national declaration against all forms of racism and discrimination at the Human Rights Council meeting. Also at the forthcoming United Nations General Assembly, the Netherlands will focus in particular on combating racism, xenophobia, antisemitism and Islamophobia,' Kaag said."
Date
July 8, 2021
Title
Jewish Groups Applaud the Netherlands for Skipping Durban IV Event âTarnished by Antisemitismâ, The Algemeiner
Author(s)
Sharon Wrobel
Original Source
https://www.algemeiner.com/2021/07/08/jewish-groups-applaud-the-netherlands-for-skipping-durban-iv-event-tarnished-by-antisemitism/
Attachment
Click here to view this article in MS Word/PDF format