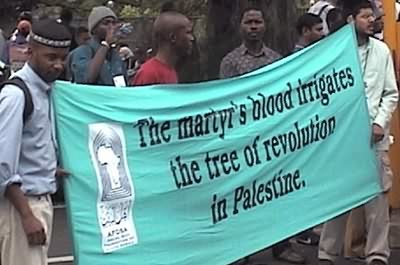 Rally during the first Durban Conference
"On August 31, Bânai Bârith Will Lead Communal Response to 20th Anniversary of Event Poisoned by Anti-Semitism

Bânai Bârith International, which brought the largest multinational Jewish delegations to the 2001 World Conference against Racism in Durban, South Africa, and its follow-up meetings in 2009, strongly commends the United States for having reportedly committed not to take part in a United Nations summit marking the eventâs 20th anniversary in September. The 2001 conference was poisoned by manifestations of virulent anti-Zionism and open anti-Semitism.

Bânai Bârith, which has led Jewish engagement at the U.N. since the world bodyâs founding in 1945, will spearhead the communityâs response to the forthcoming summit with a major event on August 31.

Over the past year, Bânai Bârithâwhich also organized a high-level event in New York upon Durbanâs 10th anniversary in 2011âhas worked to ensure continued awareness of Durbanâs toxic legacy by speaking publicly on the topic at U.N. forums, publishing relevant commentary and privately reminding ambassadors from around the world that the fight against racism must not be undercut by crass politicization and outright bigotry.

The Durban Declaration and Programme of Action singled out only one countryâthe worldâs only Jewish state and the Middle Eastâs only pluralistic democracy, Israelâfor obscene implied characterization as racist. The 2001 conferenceâs NGO Forum went even further, defaming Israel alone as a âracist apartheid stateââand urging discrimination against those engaging with itâwhile Jewish participants were subjected to shocking physical and verbal abuse. As a result, Bânai Bârith led a Jewish walkout at Durbanâjoined ultimately by key democratic countries. The subsequent 2009 Durban Review Conference in Geneva, Switzerland, was nonetheless addressed by Holocaust-denying Iranian leader Mahmoud Ahmadinejad.

Bânai Bârith salutes the U.S. administration for taking a principled decision, like its predecessors, to deny legitimacy to a U.N. framework that purports to fight prejudice but is fundamentally marred by it.

We urge all countries of goodwill to do similarlyâand we will continue to insist that all forms of hate, including those targeting Jews, not be given a platform by foremost international institutions.

Bânai Bârith International has advocated for global Jewry and championed the cause of human rights since 1843. Bânai Bârith is recognized as a vital voice in promoting Jewish unity and continuity, a staunch defender of the State of Israel, a tireless advocate on behalf of senior citizens and a leader in disaster relief. With a presence around the world, we are the Global Voice of the Jewish Community."
Date
May 3, 2021
Title
B’nai B’rith Welcomes Report That U.S. Will Not Participate in U.N. Event Commemorating Notorious Durban Conference, Bânai Bârith
Original Source
https://www.bnaibrith.org/press-releases/bnai-brith-welcomes-report-that-us-will-not-participate-in-un-event-commemorating-notorious-durban-conference
Attachment
Click here to view this article in MS Word/PDF format